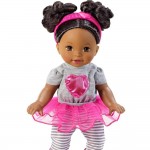 Dolls can be such an integral part of a young girl’s life as she develops into a young woman. She begins to learn nurturing skills that will stay with her a lifetime whether she becomes a mother herself or not. A young girl benefits from pretend play with a doll in so many different ways. If a little girl has a heritage of African Americans and the only dolls she has to play with are Caucasian she may get the mistaken notion that there is something wrong with her people. Her self esteem can be effected a great deal by not having a doll that resembles people in her own family unit or herself.

Until recently doll companies were not doing a very good job of representing the different cultures in the world when it came to offering dolls for girls. Ethnic dolls are being produced by more and more doll manufacturers who have realized that most little girls and their Mommies want a doll that honors their own culture and heritage. Frankly, I think that all little girls should have a “rainbow” of ethnic dolls that represents the world they live in. It breeds seeds of acceptance of both themselves and others.

This girl looks confident, doesn’t hide her curls and is of course great at her schoolwork. A good role model for your African American girl. The doll is fully washable, and comes with the outfit. One girl loves her doll so much, she is going to dress up as her for Halloween!

Another African American doll with actual afro-styled hair. It’s a simple doll, but everything your girl needs: soft body and the cloths can be taken off and replaced with other cloths fit for 18 inch dolls.

The American Girl series includes Native American, Hispanic and African American girl dolls, as well as the ordinary Caucasian type, of course. They each come with a picture book describing the life they were modeled after. Important themes from American history will become accessible to your child this way.

I do wish they’d made the Hispanic girl on the picture book a bit less blond.

Addy lives in 1864 and escapes slavery with her mom. This opens up a whole new world, but reuniting with her family is not that simple.

One warning: customers report that the hair of many of these dolls, including Addy, can’t be styled very well. That makes sense: afro-hair IS hard to style, after all.

Dottie McStuffins is known as “Doc” in the popular television show aired on the Disney Channel and Disney Junior. Doc has become a favorite of young girls since the debut of the show in March of 2012. Little Dottie is six years old and has the ability to fix toys that are broken with the help of her friends Chilly, Lambie, Hallie and Stuffy. Disney has released a line of dolls for young girls to play with including this interactive doll with 10 pieces. The four necessary batteries are included in your purchase.

Girls can use the check-up tools to listen to Lambie’s heart, look into her ears or take her temperature. Once the little lamb is fixed she will be able to talk.

This girl isn’t just black, she’s also a professional! Quite a unique doll in that sense as well.

The Cabbage Patch Kids are back this year and are expected to be just as popular with today’s girls as they were back in the 1980s when they were first introduced. The dolls are 14 inches tall and come with their own birth certificate and adoption papers. Each doll has a unique look and facial expression and comes with fashions and shoes that can be removed. African American dolls are included in the Cabbage Patch Kids line of dolls allowing young girls to identify better with their doll.

The dolls also have a specific fashion personality with the clothing that matches the theme. Ballerina outfits, Princess outfits, Fairy and other styles are available.

The Baby Alive dolls by Hasbro are so adorable with the large eyes and realistic hands and feet. The Beautiful Now line of dolls comes with the doll, a sweet little outfit and tools to style the baby’s hair. Girls will be able to comb baby’s hair with the play comb, pretend to cut the hair with the scissors and add a barrette from one of the three included in the set. The ability to actually wet the hair with the working spray bottle before styling makes this popular with little girls. The scissors can not harm little fingers or actually cut the doll hair. Recommended for girls aged 3 years old and older. 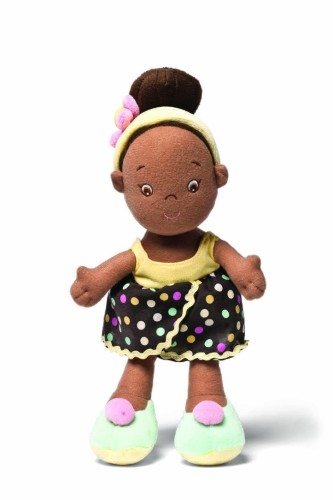 A plush doll is perfect for girls as young as 18 months old to cuddle and begin to nurture. Older girls like to play with them, too. The good thing about the soft bodies is that little hands can carry them easier. At an age where balance is still being developed a fall with a plush doll will not cause a problem with they are holding the doll when they take a spill. An Aurora doll matching her culture will help even the youngest “little mommy” feel connected with her baby that resembles what she looks like. This doll is 10 inches tall.