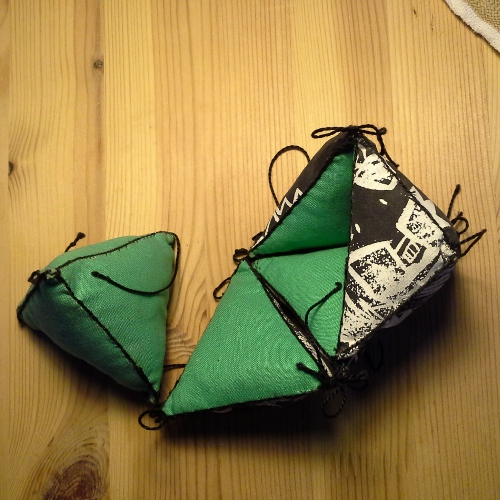 As a teen I just loved maths, especially spatial geometry. As an adult I’m still good at thinking in 3D, and I’m sure my teen ponderings and crafts (see below) helped develop that talent.

3D is no longer confined to crafts or 3D puzzles. 3D mazes, vision gadgets movies and even tvs are a lot of fun. I watched ‘The Life of Pi’ in 3D in the movies and it was cruelly realistic. In fact, I liked the book better. Of course it didn’t help that I got the flue that weekend, but I digress.

The below is a mix of 3D games, puzzles, gadgets and my personal story with crafting in 3D. Note that the cube (yes, that’s a cube) shown here was hand sewn by me at roughly the age of 15. I did the whole design as well as the execution. The black is the cube, the green is the tetrahedron hidden in every cube. So lets start with my home made stuff.

My teen research on platonic solids, in crafts, Hand sewn together

My dad is a mathematician, so when I turned out to have some aptitude for that, I turned to him. I spent a lot of my teen years pondering spacial relations. Of the type you see above.

This was a project of mine I did growing up. I don’t remember quite how it started, but somehow I found out that there was a tetrahedron hidden in every cube. That made me wonder if there was a cube hidden in a dodecahedron as well. It turns out: there was.

I decided that this was a nice project to make: I created a tetrahedron that could hide in a cube, which in turn could be hidden in a dodecahedron.

The fact is, you can also hide the tetrahedron in another platonic solid: the Octahedron, but I didn’t find that visually interesting, so I didn’t make it.

I must have figured out whether it was possible to get to the dodecahedron from an icosahedron, but I don’t remember.

What I do remember was that the solution, mathematically speaking, was in matching up the edges of one with the faces of the other.

To see how this cube unfolds to show a tetrahedron, check the gallery above.

A small frog figurine is included, though users report that a penny works better.

3D puzzles – With results fit for the drawing room

Once you get the hang of 3d puzzles, you will not want to go back to old fashioned 2D flat puzzles. It’s just a totally different ball-game. With that Ravensburger ‘The Earth’ puzzle, you can take that literally too…

Reminiscent of those globes they used to have in the classroom (why did they go out of style, I wonder) – the added dimension of creating a globe out of puzzle pieces is amazing. If you wonder how you will avoid seeing it fall to pieces, you can rest asured: the pieces are numbered, so that finding the next piece isn’t that hard. 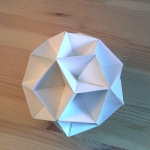 One fun fact: this polyhedron can be folded flat!

When a college of my dad’s heard that I was interested in spatial geometry, he lent my dad a book. It was quite interesting: you could create identical triangles out of a long thin piece of paper, simply by folding it again and again. The process is called ‘iteration’ in mathematical terms.

I created beautiful geometric designs out of the book. Shown here is one that is geometrical, but not at all like a platonic solid: the ‘faces’ are in fact triangles, but not the same triangles the thing is made of.

Create your own Polyhedron models

Since I created the very star-shaped polyhedron on the cover, I think this must have been the book my dad borrowed from that colleague. Since the description on Amazon is pretty limited, I can’t be sure, however. I’m particularly interested whether the folding of slices of paper is used. If it is, this is it.

However, since it was actually already out when I went to high-school, it very well may have been. See: Polyhedron Models

The 3D star models above were also made using the method described in this book.

This is a 3D maze in a hermetically closed ball. To solve the puzzle you’ll need 3D spatial imagination as well as fine motor skills.

More great 3D Puzzles for Christmas
3D Movies, Games, Comics, Magazines, and more … Why not 3D Puzzles then. These Puzzles literally provide a new dimension, compared to the traditional ones….

3D Movies, Games, Comics, Magazines, and more … Why not 3D Puzzles then. These Puzzles literally provide a new dimension, compared to the traditional ones.

Wrebbit 3D puzzles are interlocking puzzles created from the foam that is used to insulate airliner cockpits. Clearly Puzzled 3D Puzzles are crystal clear, making the result even more beautiful than 3D puzzles generally already are.

Three Dimensional Puzzles are certainly more challenging than the Two Dimensional ones. They may require more time and skills, to assemble, than 2D Puzzles, however – the end result will certainly justify the effort that you put in.

Showcased in this article are some really cool 3D Puzzles for Christmas. Have a great time putting them together with your family, and giving your Home Decor a cool look during the Holiday Season.

Check out the Cool Adult Wooden Puzzle – Never Ending Walkway 3D Puzzle. Me and my dad solved this one. It took us 2 hours and we needed all 4 of our hands. Pretty tough. See a few pictures above.

My dad is a mathematician and he has several 3d Puzzles from his student years in his study. I solved them all, with or without his help, as a teen. On one of his last birthdays he got a new 3D puzzle. It lay around in pieces for about a year, until I asked about it. I guess that woke him up enough to try it. However, he couldn’t manage.

In the end we did solve the puzzle together, in about 2 hours. Even if you are smart enough to do it on your own, without glue you will need 4 hands to solve this puzzle: simply in order to keep the pieces in their place as you solve it. In other words: a nice challenge!

Does your child love Dinosaurs? If yes – this is just the right Christmas Gift for him/her. At just over $ 5.oo per piece – the All4LessShop 3D Wooden Animal Puzzles offer great Edutainment at a very affordable price.

Recommended For Children Over Seven

This is not strictly a 3D puzzle, it’s an ordinary 2D puzzle in which the image looks like it’s 3D. This means that you have to look at the puzzle pieces from various sides (and light angles) to see where it fits. This makes the puzzle an extra challenge.

The finished result is said to be so beautiful – ready to be framed, in fact.

A nice Christmas treat for all Harry Potter fans. When finished, this Prisoner of Azkaban Puzzle provides a cool 3D effects. Kids will surely love to decorate their room with this nice Decorative Puzzle.

Recommended For ~ Kids Over Six

Before starting out on 3D however, you may want to puzzle in 2D with Tangram.