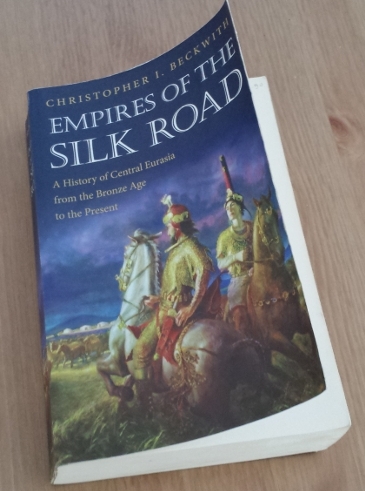 As a student of Indian history, philosophy and religion, the wider context of Asian culture fascinates me. How do all those cultures relate to each other? What does the famous Silk Road have to do with anything? Aryans came from central Asia to become the prominent Brahman sect in India – but where did they come from?

Currently most of our trade happens on the sea. You probably thought about this as little as I did before reading this book – but all the important cities of the world are in fact on the sea, and near to waterways in land: New York, London, Hong Kong.

What if, at one time, trade happened mostly over land? How did our cultures interact at that time? That is the central question that ‘Empires of the Silk Road‘ aims to answer.

“The warriors of Central Eurasia were not Barbarians. They were heroes, and the epics of their peoples sing their undying fame.” (p. xxv)

The central thesis of Beckwith’s book is that sea power is a new development. He argues that in the past (ending about 800 years ago) travel over land was the main route for trade and as a result central Asia was richer and way more important. As a cultural legacy of that the mystic of the Silk road still survives. But what if the silk road merely represents a culture of central Asia that traded, grew rich, fought with each others (the famous huns) and ourselves and ultimately became less prominent as other methods of trade made them obsolete?

This is the kind of book that is likely to be attacked for factual inaccuracies, while at the same time being very influential in terms of it’s general idea. It’s not possible to write about 3000 years of history – much of it hardly studied – and not make mistakes. However, the general point is well made.

You’ll be startled to read Chinese names right alongside more familiar Greek and European names. This book is paradigm changing. Literally. You won’t look the same at the history of Europe and Asia again. 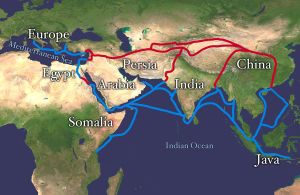 Central Asia is the blank spot in our historical view of the world. We tend to think about the history of individual countries, starting with countries that make their mark today: the USA, England, Germany, France, India, China…

Looking at the rich world cities, most are at the edge of continents: on the ocean. Whether it’s Sao Paulo, Hong Kong, New York, Amsterdam or London – all are near the water. That makes sense: trade happens overseas these days.

This book makes the claim that at one time – ending about 8 centuries ago – this region was powerful, culturally vibrant and a mixing pot.

Religion as my witness

For the religious historian the central importance of this region isn’t as much of a surprise as you would perhaps think. The spread of Buddhism into what is now Russia and China went by the Silk Road. Similarly Mithraism and Manicheïsme were at one time popular along the silk road.

Central Asia was a huge deal.

And you may not think religion is that big a deal – but in a world where religion was THE way people looked at the world, it too was very important. The fact that major religions spread through the silk road is testimony to the importance not merely of the silk road itself, but also of the regions through which it went.

We know about the importance of this region in Buddhism, Manicheism and Mithraism through archaeology: abandoned monasteries, statues, cities.