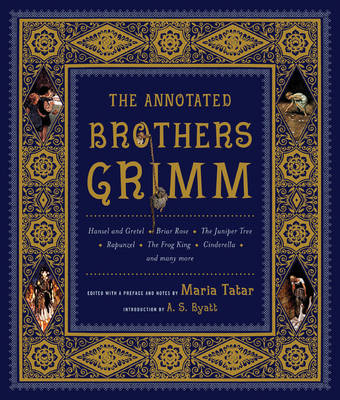 We had a well supplied library of books growing up – both at home and at my grandparent’s: my grandmother collected children’s books. However, I did not start reading the collections of fairy tales we had till I was in my teens. I don’t know what sparked the interest, but I worked through not only our Brothers Grimm, but also a book of Hansel and Gretel stories and of course Hans Christian Andersen. I’m sure there were more, but that’s what I remember out of the top of my head.

When I came across this book – The Annotated Brothers Grimm– I just had to have it. Having been intrigued by innuendo about sexual licence in the classic fairy tales, about horror stories suppressed, about how the fairy tales were edited in later versions of the tales to suit children, I wanted to know more.

It turns out that Maria Tatar’s interpretation of Rumpelstiltskin isn’t as racy as rumors suggest. In fact, she plays down the amount of sexual innuendo, though also stressing at times how in an oral culture the teller would have suggested things with his tone of voice to give layers of meaning to stories for the adults that the children also present would not understand.

On the other hand, there’s no tuning down the violence in the original stories.

As the preface notes: this is only a selection of the original Grimm fairy tales, though newly translated for the purpose. The reason it’s only a selection, is because the original contains stories we are now simply not interested in. ‘The tales collected here represent, for the most part, tales that contain magic – magic both as a device and as an effect on the reader. These are tales that continue to enchant and entrance, the stories that invite us to engage with characters, events, and conflicts that still matter to us today.’ (pp. xv, xvi)

Still, you will find more than just the standard stock of Little Red Riding Hood and Snow White in these pages. From fools to tricksters, boys and girls to frogs and cats.

Our culture has stressed the stories featuring girls – it’s not for nothing that Disney has a whole ‘princess’ line. Where is the prince? For some reason he’s way less important. Well, in the original stories there were boys and men too: twelve brothers, the fisherman and his wife, the brave little tailor etc. The stories are fun, playful, sometimes a bit moralistic and usually somewhat magical.

Maria Tatar has written scholarly works on the Grimm fairy tales before. This volume is just what you and I would want to glean from that scholarship: interesting stories and footnotes about how they changed in the editing. And what of course we also want is the racy details that make a good story at a dinner party: how the brothers Grimm included extreme violence as well as antisemitism and how their work played into the German project of nation building at the end of the 19th century.

And yes, this book makes a great gift for any reader with a love for either history, fairy tales, magic or literature.

One thought on “The Annotated Brothers Grimm Fairy Tales”