Judaism is one of the oldest surviving religions in the world. It claims a historical continuity of more than 3000 years. Hanukkah is probably the most popular of it’s celebrations.

I admire Judaism and Jews for many reasons. I like History and am amazed how long followers of this religion have been able to preserve their philosophy and culture despite so many adversities.

Another fact that I admire about the Jewish people is their high level of achievement in academics and various professions/business.

On this page you will find gift ideas for Hannukah, Birthdays and Valentine’s Day.

Kosher food that you would not guess was Jewish. A great addition to your kitchen, whether you’re new to Kosher cooking, or want to broaden your cooking with non-traditional kosher recipes.

Valentines day has become a popular day all over the world: people of all religions celebrate it, including Jews of course. Traditionally Jews celebrate love at Tu B’Av, a celebration that falls in early August or late July. Those hot summer months are perfect for a wedding, for instance. On this page you’ll find love gifts for your Jewish, husband, wife, partner, boyfriend or girlfriend, whether you celebrate Valentines or Tu B’Av.

In ancient times young Jewish girls would go out dressed in white and dance in the vineyards, seeking the attention of young Jewish Men.
Tu B’Av has become a popular date for weddings, both in Israel and in Western countries. Dances and celebrations are held all over Israel and Jewish people gift flowers, gifts and cards to loved ones.

Most women people love chocolate, and this chocolate is certified kosher, so you’re safe from a religious point of view.

Etz Hayim, a publication of the Conservative movement, was produced through a joint venture of the Rabbinical Assembly, the United Synagogue of Conservative Judaism, and The Jewish Publication Society.

This new, smaller edition is a convenient alternative to the standard hardcover edition and is ideal for personal study and travel. It contains all the material in the original, excerpt for the essays. The Bible text, translations, and commentaries as well as the blessings, artwork, maps, glossary and other reference tools for the worshiper and student of Torah reader are included.

Everyman’s Talmud: The Major Teachings of the Rabbinic Sages

As one reader says: Abraham Cohen’s _Everyman’s Talmud_ was the first complete English introduction to the Talmud when it was published in 1928. So far as I know, it has never been surpassed.

It is admirably thorough. In about 400 pages Rabbi Cohen hits all the major Talmudic themes: God and man, revelation, Jewish practice including ethics and jurisprudence. Filled with well-chosen quotations and explicated by Rabbi Cohen’s crisp, scholarly expository prose, the volume is not at all a quick and easy read; you will want to take your time with this one. But your efforts will be well repaid.

Not that I’m an expert myself — but if I had to pick just one introductory volume on the Talmud for those who simply want to know what it says, this would be it. Highly recommended as an overview of rabbinic theology.

The Essential Kabbalah: The Heart of Jewish Mysticism

Learn about the Kabbalah

The Jewish tradition of the Kabalah got a lot of press with Madonna’s adoption of it. However, there’s a difference between the Kabbalah of the New Age variety, and the Jewish original. For one thing, you’re supposed to be a practicing Jew to study the latter. These books will help your husband or boy friend find out the truth amidst the hype.

‘The Essential …’ series is well known for being about original texts. That means of course that the only thing the editor added was the introduction (usually excellent) and the selection. 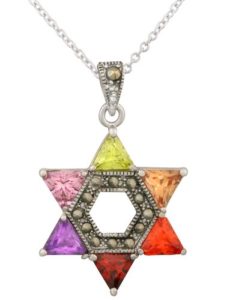 Beautiful Jewelry for Women: The Star of David = Magen David

Star of David, also known as the Shield of David or Magen David is a proud symbol of Jewish identity. It also features on the Israeli flag and is usually colored blue with a white background.

The Star of David is an internationally recognised symbol of the Jewish Faith and Judaism. It is also known as Magen David or the Shield of David. The shape is formed by a hexagram, which is a combination of two equilateral triangles and has been used as a Jewish symbol since the 17th Century. However, the term Shield of David was used as early as the 11th century.

There’s a beautiful range of Star of David jewelry for women available. Whether it is gold or silver, pendants, bracelets, beads or earrings, a variety of Star of David Jewelry is featured here.

Perhaps you are looking for Star of David jewelry for yourself or as a meaningful gift for a special lady in your life? Illustrated above is the JanKuo Jewelry Rhodium Plated Multicolor CZ Jewish Star of David Pendant Necklace. See below for more details.

From Bling Jewelry, this sterling silver Star of David Pendant is designed using blue opal, which shimmers in the light, inlaid in .925 Sterling Silver. The Pendant measures 1 inch in length and weighs 3.4 grams.
While suitable for wearing at any time of year, as Opal is a birthstone, it would make a very thoughtful and meningful gift for those born in October.
(Chain not included)

Thinking of getting engaged/married this Valentine’s? Buy her an engagement ring sporting the Star of David. There are beautiful pendants available too.

Even if you aren’t getting married on Valentine’s Day – it’s still a good idea to gift her a beautiful piece of Jewelry with this beautiful and ancient symbol of Jewishness.

Men love jewelry as much as a women do. However, in terms of style, most men want something more masculine. The Star of David jewelry collection of rings, cufflinks, money clips and pendant necklaces are designed with men in mind.

I think these rings are great gift ideas for the Jewish man who is proud to display his spiritual faith. The Star of David a six-pointed star made up of two triangles superimposed over each other. It is the most common symbol associated with the Jewish people.

This masculine Star of David sterling silver pendant is on a 24″ chain. Smooth polished finish with the traditional six point star design. Comes with a little black pouch to place the pendant in when he is not wearing it. This is an ideal gift for the man in your life who is not into flashy and sparkly jewelry to wear, something he would like more suited for a real man.

These masterpiece cufflinks crafted in America using pewter and molds. Before going to market, each pair is assured quality by adding the finishing touches by hand. The rhodium silver frame will never need to be polished.
Both men and women can wear these cufflinks. They complement any color of clothing.

Kabbalah Red String – roite bindele in Yiddish, is supposed to ward off bad luck caused by the Aiyin Hara or Evil Eye.
Kabbalah Red String Bracelet is made from thin red wool thread and is worn on the left wrist. The string from the tomb of the Hebrew Biblical matriarch Rachel is believed by many to have great powers of “good fortune” and grant added divine protection to those who wear it.
It’s all a question of belief, if either one of you does believe in Kabbalah – this is a good gift idea for Valentine’s Day.

Are All Jewish Men Geniuses?

Well, of course not: your husband or boyfriend probably isn’t, is he?It isn’t rationally possible. For some reason however, Jews do seem to have a higher level of achievement in different walks of life, as compared to people from other religions.
Maybe you can credit this to Jewish emphasis on education, their predominantly urban life, and other such factors. I have been interested in Judaism and the Jewish people for a long time. Unfortunately I am no expert, but I try and learn.

One common misconception is about the Jewish Phenotype, or the way Jews look. There are Ethiopian Jews, and Jews with typical Indian and Mongoloid looks. It is wrong to think that all Jews look White/Middle Eastern.
So much for my wanderings, now let’s see what will make a Jewish Genius happy on Valentine’s Day and Tu B’Av.

If your Valentine is an Art lover – he would love receiving a Painting with a Jewish theme. There is a wide variety of Jewish Paintings which can be gifted on the Valentine’s Day. Above is an example of a Jerusalem themed painting.

Tallit is worn by orthodox Sephardic Jewish Men over 13 for morning prayer. It’s worn by Ashkenazic men after they’re married.
Orthodox Jewish men always cover their heads by wearing a Kippah. Wearing a skullcap is seen as a sign of devoutness. In Yiddish it’s called a Yarmulke.

The Hamsa is a sacred symbol of luck and health throughout the Middle East. This symbol unites Muslims and Jews in a common cultural heritage. On this page you will find Hamsa clocks and wall decoration. Pretty, unique and bringing good luck – what more can you want for your home?

Hamsa is known as Hamesh in Hebrew. It is also known as the hand of Miriam – she incidentally was the sister of Moses and Aaron.
In Middle Eastern culture the Hamsa sign is considered a defense against the evil eye. Many Jews believe that the five fingers of the hamsa hand remind its wearer to use their five senses to praise God.

The hamsa is popular as a charm most often worn as a necklace, but can be found as a decorative element in houses, on key chains, on other jewellery items. Many artists use the image of the hamsa hand in jewelry, paintings, sculptures, wall decorations, and amulets.
Protect your Valentine from the Evil Eye and at the same time remind her to praise God. Gift your Jewish lady a Hamsa this Valentine’s.

The word “Hamsa” comes from the root word for the number five in Hebrew. Or perhaps the word for ‘five’ comes from the root for ‘hand’. Either way, the number five is considered to have special magical power bring good luck .The number 5 represented by the 5 fingers of an open human hand in a natural motion of the holding an open hand to warn off an oncoming enemy. The shape of the hand is a stop sign to the devil. It is commonly believed that both the Hamsa and the colors turquoise & blue are defenders against all Evil.