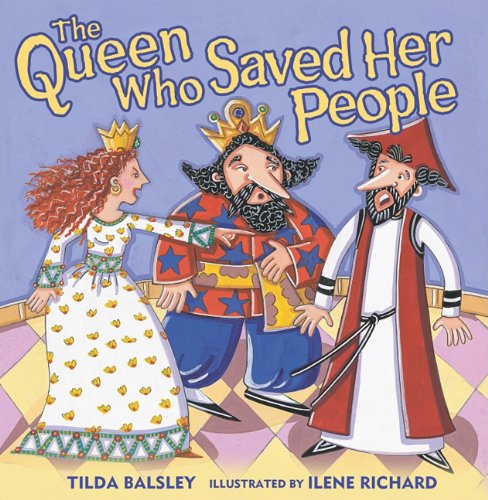 Purim is often considered the most fun and most child-centered of the Jewish holidays. When else do kids get to dress up, make noise, shout and generally have fun at a religious celebration?

Summing it in one sentence, Purim is based on the story told in bible’s Book of Esther, in which Queen Ester, with the aid of her cousin Mordecai prevent the “evil” Haman from exterminating the Jewish people of ancient Persia. The story is re-told each Purim, so it is no surprise that there are so many great kid’s books for Purim.

Shown above: The Queen who saved her people.

Here you will find all of my favorite Purim books for kids so kids can learn about the mitzvot of Purim in an age appropriate way. From pre-k to teens.

Ages 4-8: Pre-k, Kindergarten and early elementary school. In other words: from toddlers to early readers.

A fun board book for kids written in rhyme. Colorful and easy to understand this 12 page board book gives young children a glimpse of the holiday and traditions, on a level that they can understand.

This will help you teach the 4 mitzvot of purim with kindergarteners.

The Story of Esther: A Purim Tale

The Purim story is fun and exciting and this 32 page book really highlights both of those features. It includes all the key characters: a mighty king, a jealous bad guy, and a wise uncle and a beautiful Queen as the heroine.

Cakes and Miracles: A Purim Tale

This is a great book to add to your Purim collection. Rather than telling the story of Esther and Purim, this delightful book is the story of the strength of character of a young blind boy who helps his mother create special hamantashen (three sided sweets eaten at purim) for Purim. This book has been updated since it’s original publication to be more readable for children.

Not only does this book tell the story of Purim in a clear and easy to follow manner, it adds pronunciation assistance to help young readers. This is a great book for anyone new to Purim, it’s characters or holiday terms. It is part of the Rookie Books series.

Fun illustrations, rhyme, rhythm (essential for poetry that’s read out loud) and fun! And yet, the essence of the story remains clear, both in terms of the emotions and motivations of the central characters. All that without becoming pedantic.

The printing – a color for the words of each character – allows for easily turning the book into a children’s play.

Recommended by  Jewish Book World Magazine for ages 5 through 9. Adults reading will appreciate some of the fun asides.

Children, pre-teens and teens (8 through 20-ish)

Behold Your Queen! A Story of Esther

A reader on Amazon says:

“I am stunned at how well this book stands the test of time. I first read this book in the 5th grade, many many years ago and when I happened upon this reprint, I scooped it up. I was not disappointed and devoured this book, even shedding a few tears as I read the story.

If you are between the ages of 8-?, Christian, Jew, Biblical history buff, homeschooler, or just like a good read with plenty of suspense, you will most likely enjoy and appreciate this story of Esther. It will also give you an enlightened sense of history, and especially clue you in as to why certain things happened the way they did in Bible times. It has a beautiful female hero, a despicable villain, a handsome king, and a whole lot more, but I don’t want to spoil the story for you. Reading this again makes me want to do further research on that period and I’ll be cracking my Bible open for the first time in a long time to read the Book of Esther. “

A reader says (mistakenly thinking this book is out of print)

This is a great assortment of Purim books. That costume book is a good idea. Otherwise, the Purim parades can get pretty boring, with all Esther and Ahashuerus costumes! I was Vashti one year, I recall. My fave Purim book (out of print but available on Kindle) is Behold Your Queen, by Gladys Malvern. More for middle school girls…

Esther was not the only hero or heroine in the Purim story. This wonderful book highlights many of the other characters in addition to Esther. A great book for initiating discussions on the holiday and on what constitutes a hero.

How is Purim celebrated?

Jews all around the world drink wine, wear masks and costumes, and engage in public celebrations. Plays, Parodies, and Beauty Contests are an integral part of Purim celebrations. In the US Purim is sometimes referred to as the Jewish Mardi Gras!

used when Haman’s name is mentioned during the reading of the Megillah, as tradition dictates, to blot out the name of evil.

The story of Esther and Purim

The story of Esther is one of the more popular tales in the Bible, but her feast is only a minor Jewish holiday. I guess that’s often the fate of prominent women. Esther was born Hadassah, she was the Queen of the Persian king Ahasuerus – Xerxes I. The name Esther is derived from Persian Satarah, meaning star.

Purim is a festival that commemorates the deliverance of the Jewish people living throughout the ancient Persian Empire from a plot by Haman the Agagite to annihilate them.

Esther is considered a prophet in Judaism and a whole book – Book of Esther – is dedicated to her in the Jewish and Christian Bibles.

Esther was raised by her cousin Mordecai as her parents died early.

What happened was – Mordecai, Queen Esther’s cousin refused to bow down to Haman – who was one of the most powerful ministers in King Ahasuerus’ court. Mordecai was a Jew and would bow down only before God.

King Ahasuerus couldn’t sleep that night and had some histories read to him. He was reminded that Mordecai had saved him from an assassination attempt, and had received no reward in return.

The King decided to hang Haman for his bad advice and appointed Mordecai as his Prime Minister. He also gave the Jews the right to defend themselves against any enemy.

Jews established an annual feast, the feast of Purim, in memory of their deliverance.