Hindus today are spread over all continents in the world, and it would be wrong be clump them all together. However, many Hindus may recognize themselves in the gift suggestions given here. 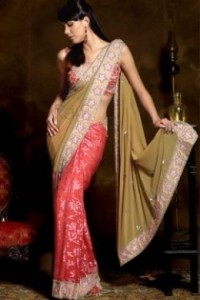 Sari – The Most Feminine of Female Clothing

Sari – also spelt Saree – in my view is the most sensual and feminine dress. An ideal gift for Valentine’s Day – Sari has been a part of the South Asian culture for many centuries and is tied to Spiritual senses of people here.

In case your Valentine has never worn a Saree – it would be a bit tough to put it on and handle it. However, most Saris sold outside South Asia take this factor into account and include instructions on wearing it properly.

Designer Saris and specialty ones made in reputed towns like Banaras and Kanchipuram can cost a fortune. These are more than garments, think of them as works of art and you’ll feel more comfortable paying for these gorgeous Saris.

With lots of Spiritual and Religious symbols and countless Gods and Goddesses – you’ll never run out of gift ideas – if it’s Religious Jewelry that you wish to gift your Hindu Valentine.

You can choose from Pendants, Bracelets, Rings, and more. If you know his favorite Religious symbol and God/Goddess good – otherwise find it out and gift him an appropriate piece of Jewelry.

Expensive or regular, the price does not matter. What matters is the emotion behind the gift. Please take a look at some of the options.

OM or AUM is the most sacred symbol in Hinduism. It is also regarded as mystical and sacred by other Indic religions like Buddhism, Jainism, and Sikhism.

It represents the unmanifest as well as the manifest aspects of God. It is believed to be the basic sound of the world and to contain all other sounds. It is a mantra or prayer in itself.

There are several meanings of Om and entire scriptures have been dedicated to this Holy sound and symbol.
Charm her with Jewelry featuring the Om symbol this Valentine’s. There is a cool variety of Om Jewelry to choose from. This is one Valentine gift all Hindu women will remember for a lifetime. 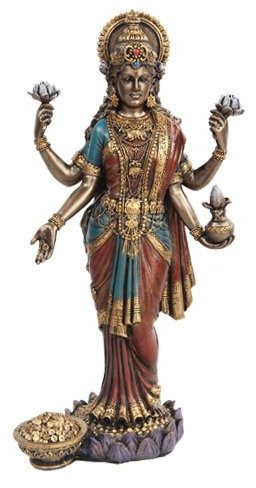 Statues of Gods and Goddesses

Hinduism is a Polytheistic religion and according to some philosophies has a total of 330 million Gods and Goddesses. A few dozen of these are popular among the common folks who worship them.

It is a real cool idea to gift your Valentine a statue of her favorite God and/or Goddess on Valentine’s Day. The thought might not be appreciated much by Hindus living in India – I think this idea makes more sense for Hindus living abroad.

Female goddesses that may be appropriate are Laksmi (shown), Durga, Saraswati and Kali.

Krishna and Ganesha: the two sweetest Gods in Hinduism

There are numerous gods in Hinduism, but the two most popular are Krishna and Ganesha.
Ganesha (or Ganesh) is the son of Shiva: one of the three most important gods in the Hindu Pantheon.
Krishna is the avatar of Vishnu, another of the most important Hindu Gods.

Both have sweet stories and a characteristic look.

Krishna’s story has many aspects. He was a cute but naughty child, a teenager in love, and eventually a counselor of war in the Mahabharata. His dark black or blue skin may be a reference to his non-Aryan background, or so scholars say.

The young Krishna, when he was a cowherd, had many admirers, but his one true love was Radha. This story is so popular in some part of India, that the pair is worshiped as one: Radha Krishna.

Ganesh or Ganesha – The most popular Hindu God

Son of Shiva and Parvati, two powerful Hindu deities, Ganesha is probably the most popular Hindu god. Whether it’s because he’s the result of a mistake by the father, or because of the elephant head or some other reason I don’t know. Still, the basic nature of Ganesha is to protect the home, so that’s probably one of the reasons.

The story of Ganesha is one of the divide between parent and child. The reason that Ganesha has an elephant’s head is that Shiva, not knowing he had a son, cut his head off and a new one had to be found.

Religious Ganesh, a Hindu God with the head of an elephant, is known for his fondness for sweets and love for life. In many pictures and statues his favorite dish of Indian sweets is kept near him and is eyed covetously by the mouse, which is his vehicle.

An interesting interpretation of the symbolism associated with Ganesha states that the mouse is representative of our restless mind and Ganesha is its master.

Son of Shiva and Parvati, two powerful Hindu deities, Ganesh is the noble elephant God who is kind to all his worshippers and blesses them with peace and prosperity. Ganesha’s popularity is very evident and he is seen in every Shiva shrine on the island of Bali, for instance. He is generally depicted with four arms and in various postures sitting, standing, reclining and dancing.

Celebrated on the 14th of January

Makar Sankranti is an ancient Hindu festival which has been celebrated for thousands of years.

Makar Sankranti celebrates the the transition of the Sun from Dhanu rashi (Sagittarius) to Makara rashi (Capricorn).
It has been one of the one of many harvest days in India and is known by different names in different Indian languages and cultures.

Sankranti is a solar event, therefore the date of Makar Sankranti remains constant over a long term, 14 January. The traditional Indian Calendar is Lunar based and dates of all Hindu festivals, except Makar Sankranti, keep changing as per the Gregorian calendar.

Following are some of the variations in the names of Makar Sankranti in different parts of India, and countries outside India.
India

Valentines Day Ideas for your Hindu Boyfriend or Husband

Kamadeva carries a Sugarcane Bow and Floral Arrow, and like his Roman counterpart Cupid – the arrows give birth to desire.

Kamadeva’s two wives are Rati and Priti. Rati is the one who gets prominence. Kama’s other companions are a cuckoo, a parrot, humming bees, the season of spring, and the gentle breeze. All of these are symbols of spring season, when his festival is celebrated as Holi, Holika or Vasanta.

Hindu Mythology is quite complicated so it’s not clear whether he’s the incarnation of Pradyumna, Krishna’s son, or Brahma or Vishnu’s son. From wherever he originated – Kamadeva has certainly spread desire, love, longing, and beautiful emotions in the whole world.

Since he is the one responsible for you and your Valentine falling in love – it makes good sense to gift your Valentine a Kamadeva gift this Valentine’s Day.
Though Kamadeva is one of the minor deities in the Hindu pantheon, he is a part of a few ancient temples. His statues are not sold for home worship. 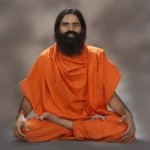 Baba Ramdev is a well known personality in India and abroad. He is known for his efforts in popularizing yoga as it is enunciated in Patanjali’s Yoga Sutras.

He has set up a world class Ayurvedic Hopsital in Haridwar and organizes Yoga camps all over the world. Over 100 million people watch his sermons and Yoga demonstrations through Television and Video.

Baba Ramdev has acquired a Scottish isle for about 2 million to set up a wellness retreat. The Little Cumbrae Island, off the fishing town of Largs in Scotland, will also serve as the guru’s base overseas, where his teachings of yoga as a means to cleanse the body and mind are gaining popularity.

If your Valentine likes Yoga or wants to get started – it is an uber cool idea to gift him something related to Baba Ramdev. He would surely appreciate this Spiritual gift on Valentine’s day.