Shown above is the singing bowl I bought off my Tibetan Buddhist sculpture teacher a few years ago. I just couldn’t resist, even though I did not have any particular use in mind at the time.

Large singing bowls like this (it has a diameter of 25 cm = 10 inch) have a very rich sound. They’re sold tuned to a particular pitch these days, but the beauty of them is really in the overtones they make. Technically these can be referred to as a chord or an interval. It’s said that it’s precisely this interval that causes the brain to move into a different state. From Beta to Alpha and sometimes into Theta.

Or in normal people speak: they sound more like a gong than a chime.

Here is how it works: Place the bowl in the open palm of one hand (Be sure to let go of the rings) and hold the wooden stick vertically like a pen in the other. Tap the bowl with a stick (you will feel the vibration) and then run a stick around the outside rim with steady pressure and speed. A series of calming tones will begin to emerge.

If not, try it again and again until you notice that the steady tone comes only when you relax, trying too hard simply sends the bowl to the floor! So enjoy the process, remember you’re an adult who is simply playing with a cup and a stick. Those who have mindlessly entertained themselves with running their finger over the rim of champagne glass at a boring banquet and those advanced in the practice of Buddhist meditation have the advantage.

Alternatively, you can use a cloth mallet, let the bowl simply stand on it’s cushion, and tap the bowl. The sound effect is very different, but also calming.

However, most of the time my large singing bowl just stands there on my altar as shown. I am using the sound in my own meditation tapes though. 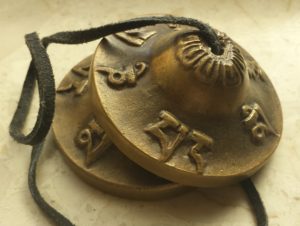 Shown to the right are my Tibetan Chimes also known as Tingsha . I use it any time I give a meditation. It’s a great sound to start and end a meditation with. They’re portable, which is a huge deal.

There are smaller singing bowls available, but I like that the chimes force me to be mindful in using them.

I was once at a workshop where the trainer used a small singing bowl and he just wasn’t getting into the meditative mood necessary to lead a meditation session well. I’m sure it was partly that he was too exited, but it can’t have helped that using the meditation bowl was just too simple. It didn’t force him to be mindful.

So that’s my first piece of advice: pick chimes if you want to lead meditation sessions. Or if you think the person who will receive them will do so.

The main reason to use any type of singing bowl or chimes is the sound. The best way to pick one is in the flesh, so you can hear the sound.

However, that may not be an option. Next best is buying your singing bowl from a trusted sales person online. On Amazon of course you can see their ratings.

If you want your bowl to be tuned to a particular chakra – aspect of the personality located in a spot in the body – you can. Each chakra has its own frequency and a singing bowl that has that frequency as one of their main sounds will activate and heal that chakra.

If that’s your aim, you may want to invest in a whole range of singing bowls. After all, you need all your chakra’s balanced, not just the one.

However, Tibetan Singing Bowls are traditionally created to heal the whole mind and body, not just any one aspect of it.

Some people seem to think that it’s better to have an old bowl than a new one. When you think about it, this is nonsense. What you really want is the best sound you can buy within your budget.

And yes, ancient bowls that are still around are likely to have a great sound. True. If they didn’t, they’d have been melted into something else by now. It’s a bit like with violins: any 17th century violins still in circulation are either museum pieces or they have such a great sound that the cost of maintaining them is worth it.

That doesn’t mean all 17th century violins were great. Just that the ones surviving are.

It’s similar with singing bowls. But just like with violins: for your purposes a present day bowl is just as likely to fit your needs. And while the quality of current day singing bowls varies, it’s hard to find out for sure if a singing bowl is as old as it looks.

So go for quality, not age. Singing bowls have one advantage over violins though: unless they are seriously mishandled their sound will stay just as it was when you bought it. No need to watch the moisture content of the air, for instance. 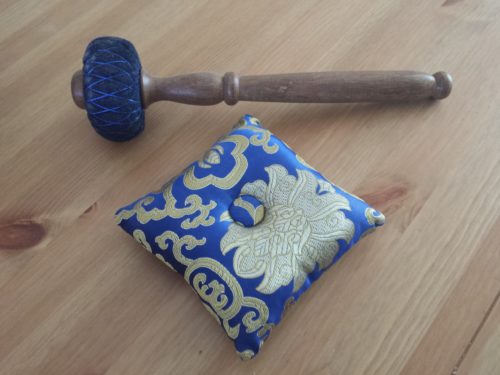 In my case, for instance, a wooden mallet was included in the sale, and in bargaining I switched it with the mallet shown above. I think it has a better sound. Wooden mallets are often included and I would recommend switching it with one that has cloth on it.

While smaller bowls often come with a cushion, they can sound just as well on a bit of cloth.

In choosing a bowl, the sound should be the main consideration. However, the color and style of the accessories do make a difference in the look of the thing: both on your own altar and when giving it.

When picking a singing bowl, I recommend the following considerations: