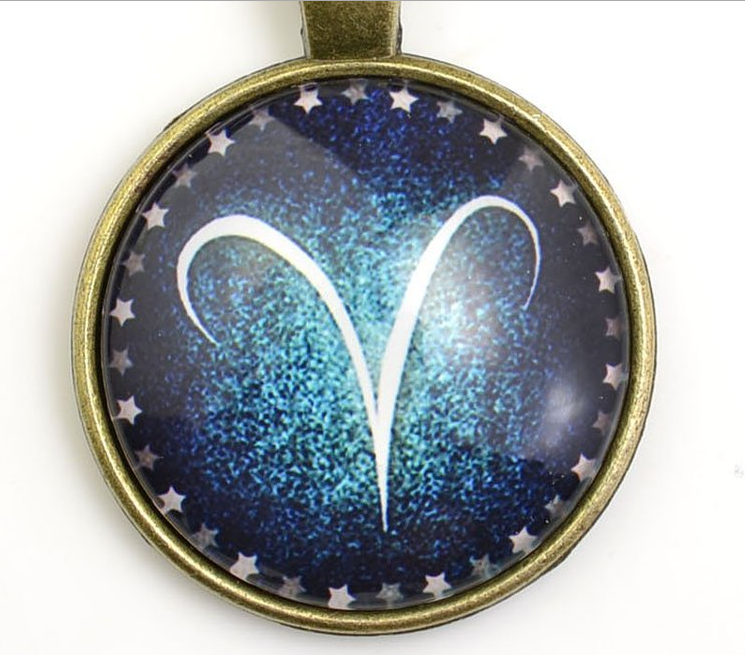 The jewelry on this page is based on the most well known and simplest aspect of astrology: the star sign we are born under. It’s very simple: Each month, though not a calendar month, has it’s own astrological name.

Astrology jewelry is a lovely personal gift for anyone with even a slightly spiritual interest.

These are stylish enough for women and yet so slick and lacking frills that they would not look bad on a man either.

The astrological sign is shown with the symbol and the image superimposed on each other.

Common dates for the star signs of the zodiac

Remember that these vary slightly per year. Anyone born on a border date (for instance April 20th or February 19th) is called a ‘cusp’. They’ll usually find they have characteristics of both sun signs. In each case the constellation is made up of cold dots with one star made from a birth stone associated with that star-sign. 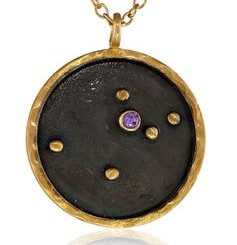 The Satya Jewelry “Zodiac” Constellation Pendant Necklace combines a love for astrology with a love for the literal stars that make up that constellation in the sky. Shown here is Aquarius. 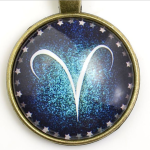 What’s more common is a pendant that shows the symbol for that star-sign. Shown here for instance a lovely blue design for Aries in glass with an alloy setting and chain.

Another classic approach is a pendant necklace with the animal / being associated with the star sign. Shown here is Pisces in silver for instance: fish. 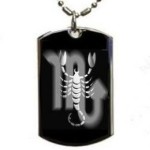 For me personally, astrology was a life savior in a time when I had no idea where to go. I had been fired, again, from a teaching job and after years of trying it was becoming clear that there was no way I was going to learn how to keep a room full of teenagers quiet and concentrated. Looking back I wonder why I ever even wanted to… but that’s another story.

Back then what I knew was this: I don’t know that I should continue trying becoming a teacher, but I also don’t know where else to go. Having tried the psychological test method – which didn’t help me at all – a friendly astrologer I trusted offered to do me a reading of my chart.

None of it was rocket science, but it did help me in a way that no psychologist ever could have. Astrology looks at two issues: who you are, and what your place in the world is. How you’re perceived and how you will experience things.

For me it helped put things into place that I knew, but just hadn’t been able to articulate. And with the articulation came, not much later, my own insight into where I had to go. I decided to start my own online business. By now I can live off my online income.

You can understand that astrology will never be debunked for me, because it’s a system that has helped me tremendously.

However, I think astrological jewelry is mainly about having a bit of fun and showing who you are.

However, true astrology is much more complicated than that. It involves the movements and relative positions of the sun, the moon and the planets.

Many modern astrologers define astrology as a symbolic language, a form of divination or an art. They apply their art to individual human psychology, relationships, wealth, success and health. Less known, these days, is that astrology is also applied to the fate of nations, occurrence of catastrophes etc.

Despite differences in definitions, a common assumption of astrologers is that the place of the planets, sun and moon relative to each other at a certain point in time, can help understand our circumstances, personality and in some cases predict the future.

The scientific community considers Astrology a pseudoscience or superstition. They cite a lack of statistically significant astrological predictions, while psychology explains much of the continued faith in astrology as a matter of cognitive biases.

From an astrological perspective it’s difficult to test the theories underlying astrology, because so many details make up an astrological chart. There’s more to astrology than being a Pisces or a Scorpio. The fact is: a competent astrologer can really help. But they do use intuition to complement their interpretation of the chart.

A competent astrologer will ask for your precise birth details: hour of birth, down to the minute, as well as the precise place. They will then proceed to calculate, with a computer these days, the position of the various planets (including sun and moon) relative to each other and the star signs. Each planet will be positioned in a star sign and a house.

The house determines the way that planet impacts the way you are positioned in the world. The star sign says more about how you experience it, who you are.

The history of astrology goes back as far as written record: the third millennium BC.

In fact, astrology and astronomy were often indistinguishable before the 18th century. The desire for prediction and understanding of life was one of the motivating factors for astronomical observation. For instance Galileo Galilei and Johannes Kepler, both famous for their scientific insights, were students of astrology.