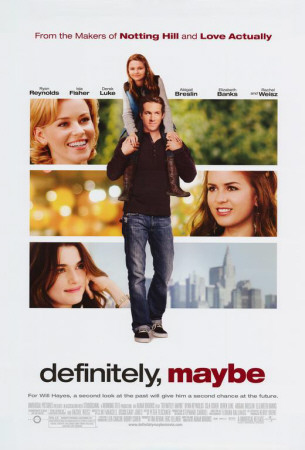 I saw ‘Definitely, Maybe‘ and ‘The Parent Trap‘ again today and I thought they make a nice contrast. Both are funny, both made me cry (well, it was a day for crying over soppy movies) and both have a happy romantic ending.

‘Definitely, Maybe‘ is about a realistic (if seriously successful) guy who gets divorced after having been with his college sweetheart for over 10 years. Their daughter gets a sex-ed class and starts asking questions about his love life and we learn the tale of guy meets three girls… Marries one, but really still loves another. No wonder the marriage doesn’t last.

The movie shows all the mess of our modern entangled love lives as well as 3 successful women and one successful man – with all their ups and downs along the way.

‘The Parent Trap‘ is a remake from a movie from 1961 and a book from 1949. It shows. Anyhow: parents meet, fall in love, get divorced right after their twins are born, twins get divided between the parents. 11 years later the twins meet at summer camp and decide to get their parents back together.

Even though mom in the Parent Trap is a successful woman too, she designs wedding dresses: the ultimate female fantasy job. Classic patterns include: the bitch who is after his money, classic camping jokes, and of course the big one: mom and dad get back together.

The parent trap is enlivened with loads of practical jokes on camp and later that Lindsay Lohan pulls off brilliantly – playing both twins.

The humor in Definitely Maybe is a bit more sophisticated. In fact, for a US audience the movie is rated PG-13, though here in Europe it’s rated for ‘all’ – I suppose the lack of R-rated action (nothing more than kisses) explains the European rating. The US rating has something to do with Maya using the word ‘thrust’ in polite company and similar verbal jokes. I seriously doubt kids will be shocked, though this is definitely a movie that can start a conversation. Which is precisely why I recommend it.

Personally I’d be tempted to show the two movies in sequence if I were getting a divorce. I think they make a great talking point about expectations and explanations. Kids tend to blame themselves and hope their parents will get back together. The Parent Trap expresses the fantasy (show it first). Definitely, Maybe shows just how little divorce has to do with the kids themselves (other than as victims of it) and that parents will hope for a new relationship at some point.

I wonder, are there other popular movies out there that combine divorce, romance and humor? Do let me know in the comments. Do you agree that Definitely, Maybe is suitable for kids aged 10 and up?