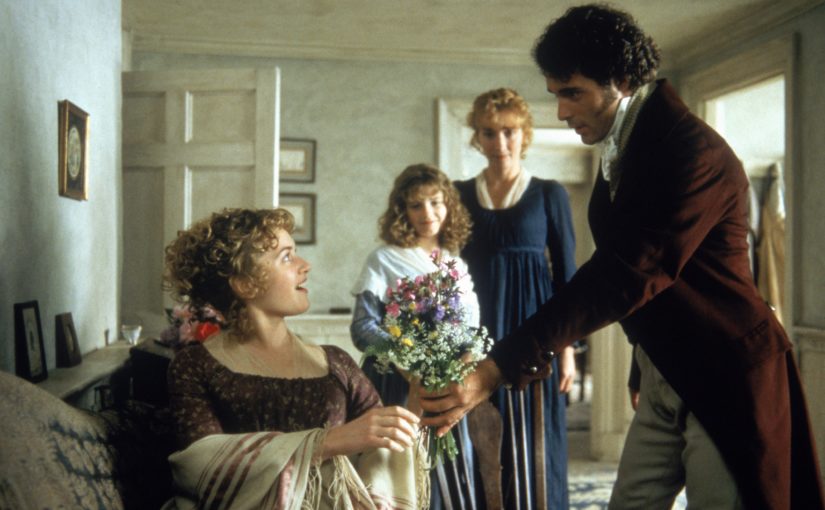 The story of two sisters who lose their father just when they’re old enough to get married, set in early 19th century England.

I’m a Jane Austen fan and love all of these movies: I’ve seen them all again and again. However, I’ll try and rate them for your benefit. Like all Austen novels this one centers around the need for marriage not merely for love but also as the only way for a woman of class but without money to make her way in the world.

This version of Sense and Sensibility is a bit over-acted at times. On the other hand the movie shows very well how uncomfortable it can be to be dependent on wealthy but unkind family.

On the other hand, I do like this Elinor – so very practical that when Edward kneels to propose marriage at last, she protests because she doesn’t want his cloths to get dirty.

Still – whichever way you put it: I do like this version of Sense and Sensibility least of the three I’ve seen. Only for Jane Austen fans – and not all of them will like it.

A note on the technology: the adaptation for DVD is good enough. Good subtitling and decent colors. 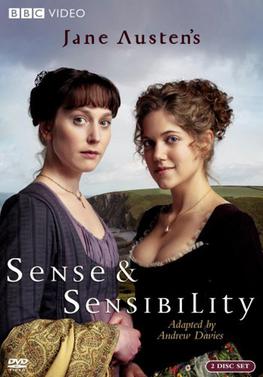 This version of Sense and Sensibility comes in three installments, ready for TV.

As you’d expect from the BBC the story stays very close to the book.

Perhaps because the cast of this movie is not a list of well known names this adaptation has a real country feel to it. I imagine the cottage the family moves into is just the kind Jane Austen would have imagined for them.

The strength of this movie is perhaps in how it makes the sensuality that is at the heart of the story, though always hidden by Austen, tangible while never leaving the confines of 18th century nobility. The characters behave as you’d expect people of their class to behave and yet they are ruled by the same emotions that rule people in our times.

And yes, you could have this movie on with small kids in the room. It’s still Jane Austen after all.

This star studded version of Sense and Sensibility received critical acclaim as well as box office success. Aside from the excellent acting I think it’s the humor that makes this such a good movie.

Emma Thompson manages to stay true to the character of Elinor without making her boring.

I like how Emma Thompson, who also wrote the script, manages to explain the predicament of well brought up women without money: Elinor tells Edward Ferrars (Hugh Grant) that at least he gets to inherit his fortune, she cannot even earn hers. The way it’s done enhances as a character as well as clarify the plot.

At times the movie is quite funny. Seeing Hugh Grant as Edward struggle to read aloud is a nice play on his fame.

You won’t find a more charming Willoughby (Greg Wise). His impudence as well as his smarts and charm make him a very believable flirt for Marianne (Kate Winslet) to fall in love with.

Sense and Sensibility vs Pride and Prejudice

Sense and Sensibility and Pride and Prejudice were written around the same time by Jane Austen. They share a number of themes: