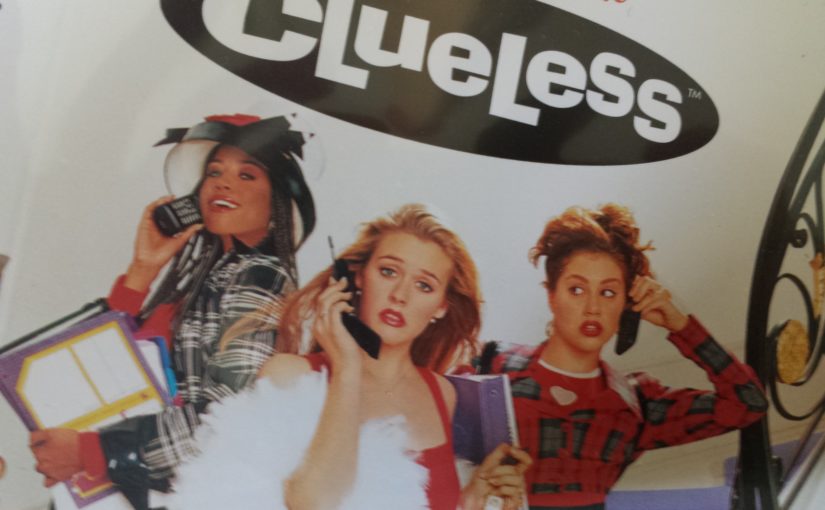 These are my favorite high school movies. It’s probably a bit juvenile of me, but I always love a good teenage movie. And since I’m a girl, I guess these are the best teenage movies for girls, at least according to me. Please leave your own teen girl movie list suggestions in the comments.
These movies are suitable for girls aged 12 and older. Since this page also gets visitors who are looking for teen movies in general (not just the ones meant for girls) I added some of my favorites at the bottom. See also my general list of best movies for teen boys and girls. 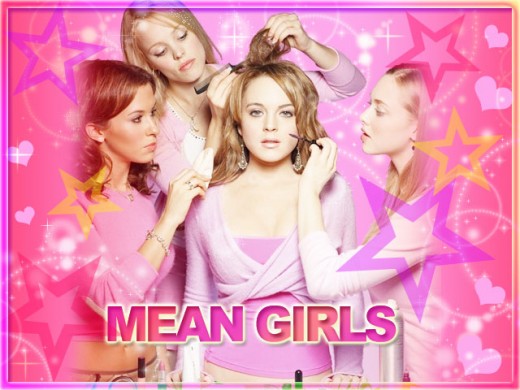 Lindsay Lohan plays a girl home-schooled in Africa who goes to a normal school for the first time at the ripe age of 15. Her parents want her to get socialized. Well, she will be! She gets into the hottest clique in her year and when the queen bee steals the guy she likes through backstabbing, she turns around and starts trying to break her new friend.

Sound bad? Well, it is. However, it’s played in such a way that it’s absolutely believable and reflects the dynamics that go on in high school. More importantly, this movie is iconic. It’s hilarious and clever, with too many memorable lines to count.

I saw this movie again last night and only at the very end remembered that I’d seen it before: that ending just rings a bell! However, the rest of the movie is funny and moving, and full of teenage drama as only happens between teen girls.

Tip: Do NOT get Mean Girls 2. Whereas the characters in the original movie were memorable, the second edition manages to create characters that are hard to distinguish from one another. The humor in the original was smart: it said something about teen relationships. If physical comedy was involved, it was always part of the storyline. In the remake there is still a lot of food being thrown around, but none of it means as much. All in all, I’d even call the remake boring. And since I love teen movies, that’s saying something.

Poppy, a spoiled brat from Beverly Hills, is sent to boarding school in England because her dad just can’t take it any more. To get out, Poppy (Emma Roberts) makes a LOT of trouble, but she also falls head over heals with the headmistress’ son. Will she stay? Will she go?

Turns out the school has more to offer than she thought at first. Touching and real, you’ll love Wild Child! It’s a classic Hollywood coming-of-age story in a creative setting.

This movie is also a subtle critique of the Hollywood life style and a call for down-to-earth (European) values. You don’t need a lawyer to win every fight, nor does every troubled teen need a therapist on call. While this is a fun move, it’s deep enough for a second and third look.

This movie was so popular they did a remake. However, they didn’t get Julia Stiles to do the sequel, so the second is not as good as the first.

I loved the first installment, though. Geeky med-student Paige (Julia Stiles) meets rogue prince-in-hiding Eddie (Luke Mably). The reviews are true: there is real chemistry between the two. As well as, of course, a fairy tale ending. However, being a princess isn’t just a fairy tale. The social complications that would arise in this scenario are all well portrayed and the whole thing has depth.

For movies number three and four they found not only a different princess, but also a different Prince Charming. Don’t bother with those! 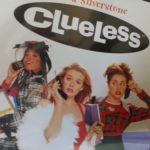 Readers of previous versions of this page have been talking about this movie for as long as I kept it updated. Living in The Netherlands, checking it out was not self-evident, till last month when I found a DVD copy.

It started out annoying me, but then it grew on me.

This is strangely suitable, as Emma, Jane Austen’s classic on which the movie is loosely based, was described by the author as:

“A Heroine Whom No One But Myself Will Much Like”

In the book I do like Emma. Perhaps because in the book we get to see so much of Emma’s inside perspective. I don’t know if I’d have liked her as a person, but I never got annoyed at her as I was reading.

However, this summation of Emma is perfect for Cher in  Clueless as well:

Our Emma seems to have all the traits you find annoying in romance heroines. She’s just a little bit feisty, very opinionated, bossy as all get out and too, too convinced of her own abilities.  She’s a busybody and a bit of a snob.

But for all the annoyances, somehow the movie stuck with me and I found myself wanting to see it again within 48 hours. Now that’s unusual.

I think it’s perhaps precisely because Cher is so unapologetically teenage-clueless – and clueless about her cluelessness – that I like it. It. Not her.

She may be rich, popular, lazy, clothing obsessed and smart. She’s still a teenager trying to navigate the confusing world of male-female relations. And she sucks at it, though of course all is well that ends well.

Don’t you mean High School Musical? Well…no. Not that I didn’t like those movies, but this one has something extra. And you guessed it, given the title. That something extra is a spiritual dimension.

It also has—and I think this is a good thing—a black guy in the lead. And he’s not a scumbag. It’s about time we got a portrayal like this!

As you’d expect, you get a lot of singing and dancing, the reverend’s daughter plays a huge part, and all ends well.

The plot starts out with Zachary (Chris Chatman) moving uptown to his aunt’s because his mother loses her job. He moves schools because of that and has to quit the church choir. His old church is also being threatened with closure. So his old friends are moody because he’s left them and because their church (and choir) are closing.

In the meantime Zachary joins and revolutionizes the church choir in his new school. They will be competing against each other at the state competition. How can this end well? Well, it does, with a few surprise twists. All in all, it’s a fun and not too sappy spiritual take on a familiar theme.

This isn’t quite high school, but there is still plenty of teen drama in this movie about the transition from school to college.

Katie Parker (Lucy Hale) is going to the same college her mother went to, so she’s expected to join the sorority her mother helped start. However, she finds out they’re wooing her friend only to get her to join and unwittingly lets the administration know about spiked drinks at the sorority. She ends up joining a different sorority and starting an all-out war between her new sorority and her mother’s old sorority. Her mother is of course disappointed and in the meantime life at college turns into hell.

I’ll let you see the movie for yourself to see how Katie gets out of it all and whether she ends up taking the high road. 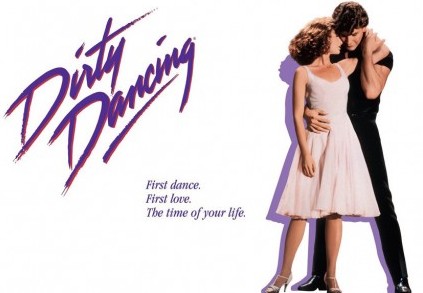 This is an old classic. It was a hit movie when I was a teenager. Mousy and idealistic Frances ‘Baby’ Houseman (Jennifer Grey) is on holiday at a resort with her parents. Baby is bored and ends up spending most of her time with the staff, who include the cool dance instructor Johnny Castle. This is the role that Patrick Swayze played and that defined him for the rest of his life.

Anyhow, it’s romantic, has great music and dancing, and ends well with Frances blossoming to find out her talents and learning to set her own course.

Shane West and Mandy Moore join in a classic good-girl bad-guy movie with a twist.
Shane plays Landon, a bad boy who gets into trouble after a prank ends badly. He has to tutor and join the school musical and meets the goody two-shoes Jamie, the reverend’s daughter.
This movie is romantic and serious. I don’t want to tell you any more of what happens, but I will say you are likely to cry buckets.

Your teenage girl will love this romantic movie. It goes right to the heart and stays with you for a long time.

In this clever, modern take on Shakespeare’s Twelfth Night, Amanda Bynes plays Viola, who wants to play soccer. However, the girls team gets cut. Since her twin-brother Sebastian is off to Europe (on tour, without their divorced parents knowledge), she decides to take his place at his new school and play soccer there. After all, she can’t miss out on the opportunity of college scouts finding her.

The constant dress up and having to learn to act like a guy has lots of room for comedy of course. How about showering? Dealing with your period? Shaving?
But the romantic twist comes when she falls in love with her roommate, the star soccer player on her team. How is she going to get out of this mess?

Funny and determined, this girl’s a real role model, and the movie is a hilarious, feel-good romp.

Another movie set in the first year of college, although this one takes place in law school instead of undergrad. Reese Witherspoon plays Elle Woods—a blonde beauty who is not taken seriously by anybody. She is, however, top of her year at beauty school and president of her sorority.

Just when she thinks he’s about to propose, her boyfriend breaks up with her, claiming that she isn’t smart or serious enough for him now that he’s a Harvard Law student. Her whole world in tatters, Elle thinks that if she can only become a law student, he will want her back. So, she starts studying for Harvard and to everybody’s surprise, she gets in.

Funny and heart-warming, Legally Blonde is about a woman who learns how to thrive in a new environment while staying true to herself.

A remake of a Hollywood classic, this version is actually better than the original. It’s romantic to the point of being a bit corny. The best ice skater of the school and the hottest hockey player get together in high school. After graduation they move their separate ways, each going professional. Then she falls and loses her eye-sight. And what happens next? Well, you’ll just have to see for yourself.

This is a romantic and sweet movie that illustrates the power of love and the rewards of perseverance against obstacles. It also features some gorgeous and incredible figure skating, as well as a special guest appearance by Michelle Kwan. If you watch it just for the skating, you won’t be disappointed.

Teen Movies for Boys and Girls

Since this page gets traffic for teen movies in general, I thought I’d put up some suggestions that all teenagers, not just the feminine ones, might enjoy.