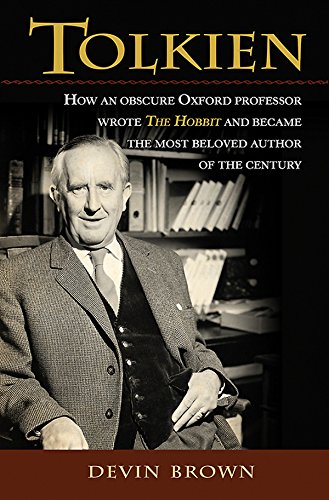 It felt like something of a betrayal when the first Tolkien movies came out. The private world my dad had taken us (my two brothers and I) to on our Sunday walks was suddenly public property. Of course we went – in a revolutionary move, our mother took all of us, including dad, to see each and every one of the movies. Revolutionary? Well yes, to us, the idea of our father going to the movies was quite something. In fact, my father was probably most amazed of all. I can just picture his dazed expression. Not that my father is stupid – he’s a university professor and while he is nothing like the distracted stereotype, he does have his quirks. Going to movies is definitely not on his list of hobbies.

Tolkien – he’s been loved for over half a century. The recent movies – part 3 of ‘The Hobbit’ is coming out soon – have increased his audience beyond anything I could have expected as a child when my dad read us The Hobbit and later ‘The Lord of the Rings’ at home and on our Sunday walks. These readings had in fact been devised as a way to keep us reasonably entertained on those walks. Although English is a second language for me, I read The Hobbit as a teen and most of The Lord of the Rings (the third volume was too dark for me, I skipped most of it).

Tolkien and The Lord of the Rings are mythical – both in themselves, and in their effect on our worldwide culture. As Devin Brown rightly says: they create a world that seems as real as our own. A mythical world that has grown to mythical in it’s proportions as well.

This biography is slim – and I won’t be recommending it to my dad, who has actually read the Silmarillion. ‘The Silmarillion?’ you ask… If you have to ask, this just may be the right biography for you. If you do  know, you have probably already read all Tolkien Biographies out there and this one is not likely to add anything new.

However, it is well written – I read it in one sitting – and informative on the basics of Tolkien’s life, with special focus on his spiritual growth. Tolkien was a devoted Catholic and the main inspiration for C.S. Lewis’ faith. They were life long friends and in fact C.S. Lewis is one of the reasons we have these lovely stories today. Without him, it is unlikely that Tolkien would have continued writing at all.

In fact it is the main theme in this biography: just how slim the chances were of these books being written in the first place, and then published in the second.

Tolkien’s life reads a bit like his books – it’s all men. Sure, there is a mother, but she dies when Tolkien is 12. She has however, by that time, instilled a love of language in him. Still, after that his world is full of men – at a private school which his guardian could hardly afford to send him to, and in the Catholic world that man (Father Morgan) lived in. While Wikipedia mentions two female cousins who introduce Tolkien to constructed languages, Devin Brown cuts them out. In fact, he makes it sound like there is hardly any contact with the extended family at all. In fact, the only women he mentions at all (and it’s almost only in passing) are his wife and daughter. Yet that wife gets compared to an elf on her gravestone.

Devin Brown is not unique in ignoring the female story-line. For the movies, in an unprecedented Hollywood move, they had to actually UP the female character’s involvement in the Lord of the Rings. And it is still a male-dominated series.

What else is there? Devin Brown gives the basic facts of Tolkien’s life, his intellectual development, his love for his wife Edith and the struggles of the academic and father of four children. In a fun twist at the end, we get a ‘Did you know that’ section, with the main talking points on Tolkien’s life and a review of ‘Fourteen Tolkien Sites to Visit without Ever Leaving your Armchair’.

All in all I would recommend this book to two types of readers: the movie buff who wants to know a bit more about the origin of his favorite movies and the religious enthusiast who likes to know more about the spiritual dimensions of Tolkien’s master pieces and how they tie into his works. However, the second type of reader may just want to pass up on this biography altogether and read the other books by Devin Brown instead. His style is fluent and he clearly knows his stuff.

Disclaimer: I received a free ebook version of this book through netgalley – a service that connects bloggers and publishers.

One thought on “Tolkien: How an Obscure Oxford Professor Wrote The Hobbit and Became the Most Beloved Author of the Century”