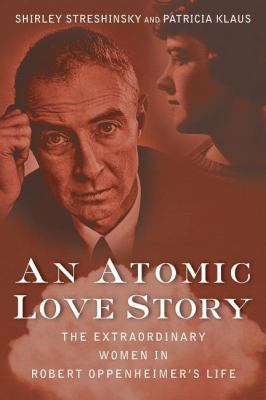 I’ve been looking around for biographies of strong women and An Atomic Love Story caught my eye. However, it is really – and this is significant – a biography of Robert Oppenheimer, the famous (and infamous) physicist who helped develop the atomic bomb and was, in the McCarthy era, accused of communist sympathies.

Shirley Streshinsky and Patricia Klaus take on this biographers challenge in style and with insight into the challenges that women have faced over the 20th century.

All three were smart. All three loved Robert and only Ruth was happy in herself. Ruth was also the only one with a significant career in her own right. And yes, this review contains spoilers.

Jean Tatlock was one of those people with loads of talent, but missing the talent for happiness. In other words: she had her ups and her downs and ultimately committed suicide in one of her depressed periods. Before she did, however, she became a medical doctor and psychiatrist.

Kitty was one of those college educated women, quite common in her era, who lived for her husband – and was always frustrated at not being able to express (or use) her talent much. Reading the book her frustration became almost tangible. However, her treatment of her kids and her escape mechanisms made her otherwise hard to relate to. I entreat anybody who still thinks women are always best in the home sphere to read this book to find out how boring and meaningless raising kids can seem.

Ruth Sherman Tolman was married to Robert’s colleague Richard Tolman, which is how they met. She was a pioneer psychologist who did much to give that profession a scientific basis. She was also, by all accounts, kind, thoughtful, introspective and the kind of woman I would not only love to meet, but also emulate.

An Atomic Love Story is quite an unusual book. Rarely do we find a biography that pays so much attention to the context of a person’s life. Robert Oppenheimer lived close to the scientific, social and political challenges of his time and did not come out unscathed any more than the women who are the main characters in this book.

I often read novels that start out well, only to flounder halfway through to an unsatisfactory conclusion. This book is the opposite. It starts out slow, with too many story lines and people to keep track of. However, when I picked it up to finish, I could not stop reading. The second half is definitely worth the patience. I expect, given the amount of characters involved, that it will be a better read the second time around so it will go on my ‘good enough to reread’ list.

Science has played a tremendous role in the history of the 20th century. Without science there would have been no atomic bomb, and it propelled physicists like Oppenheimer and Einstein into the public light. What made Oppenheimer different was his connections to the Communist party. In fact he also had connections (through his wife) to the Nazi’s, but for some reason that didn’t bother the FBI half as much. It’s relevant though, because Oppenheimer was a Jew.

As hard as it is, especially at the beginning of this book, to keep track of the people and threads woven in Oppenheimer’s life – it’s also hard to summarize them.

The book starts out simple enough: a summary of Robert Oppenheimer’s life. It also ends easy to read, with some thoughtful notes on story lines that did not make it in the main story. Robert Oppenheimer was not only a physicist, but also a very social being. He flirted (intellectually) with men and women and had a wide social circle. This accounts for the long list of people listed at the beginning of the book, in an effort to help the reader keep track of them all.

Jean, Kitty and Ruth were vibrant, smart and active women who took the world by storm – or at least hoped to. They ‘lived life to the fullest’ and the authors give us a fascinating look into their lives, as they circled around that great man of his time, Robert Oppenheimer.

Note: I read the book on my Kindle App (for Android) and while the formatting was mostly good, some of the content of the footnotes went beyond the margins.