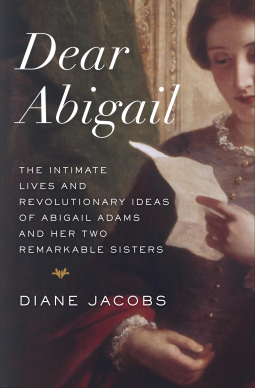 I love reading biographies. I’ve been looking, recently, for biographies of strong women. After all, we do make half the world’s population and our story needs to be known. Dear Abigail: The Intimate Lives and Revolutionary Ideas of Abigail Adams and Her Two Remarkable Sisters tells the story of the second ‘first lady’ in American history.

As a European, I never learned American History in school. So the name John Adams didn’t mean anything to me before reading this book. I learned that he was the second American President and an important factor in developing the constitution of the United States. However, that’s not really what this book is about. Instead it’s about the women in his life: his wife Abigail, her two sisters and their offspring (children and grandchildren). We’re talking mid to late 18th century, a time when the USA was in it’s infancy. Indians were still independent and a threat to those traveling West and England was the parent nation the USA became independent from. France first supported the new country and later, when it no longer had a monarch, threatened it’s peace. And yes, I learned all of that from ‘Dear Abigail’.

I found myself fascinated to read the female side to this story. Disease, raising kids, having strong opinions without the ability to vote or even have a public presence except through your husband. These intelligent sisters and their female offspring struggled with life and it’s limitations, religion and it’s inspiration, philosophy and it’s broadening horizons.

Abigail lived a life of stature, but always had to struggle to make ends meet. After all: consequence has to be lived up to in terms of servants, cloths and houses. We see her struggle first in the USA as her husband is an upcoming lawyer, then in France where he’s an ineffective diplomat to the French court, next in London where she meets the king and queen and last in the USA where she supports him first as vice-president under Washington and then as president. However, her place as wife to her husband often comes second to her place in her larger family: second daughter, mother to her kids, aunt to her nephews and nieces and prominent member of the community in her own right. The same can be said of Mary, her older sister and near-mayor of the town she lived in and Elisabeth, their younger sister.

This book is based on the letters these women and their offspring wrote one another. Diane Jacobs does a good job of selecting relevant quotes from their letters and creating a compelling narrative from them. The letters themselves are often a bit ponderous and even Diane’s prose is sometimes a bit forced. I had to look up several words and though English is my second language, that doesn’t often happen in my reading.

For me that didn’t detract from the book. I read it in a few days. It’s a look into the lives of strong intelligent women of the 18th century that had me ponder the differences between my life and theirs. Whereas my generation of feminists struggles to change the public narratives around women (no, we don’t always like pink and yes, many of us are good math and able to solve technical problems), these women had to live in world that severely limited their scope.

A woman’s life was her husband’s, both legally and factually. When you married someone you became dependent on them, as you had no chance of earning your own keep. We see Mary struggling to manage her smart and socially important but impractical husband while Abigail enjoys the fruits of a successful mate. Their brother was a drunk and he sets a clear example: when your son, or your husband, didn’t take care of himself and his family, the whole family suffered. As I read this book that story is repeated several times.

Even a smart educated woman was not able to vote (that right would take more than a century to materialize – at this time even slavery was still legal), and the church actively discouraged women from even talking at the dinner table when there were men present. As a life long student of religion I was interested to read about the social side of 18th century protestant church politics.

All in all I do recommend this book to anyone who wants to know about the human story behind the founding of the United States of America and it’s prominent families – women and men.