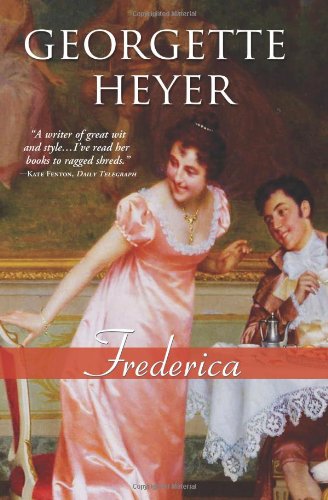 Historical Regency Romance Novels have a built in tension that no modern novel can have: all that suspense because without touching (let alone x-rated action) it’s all about manners, feelings, words, social customs and hindrances… Personally I like my romance novels clean like that, so this list reflects that. Don’t think though that this means these are all CHRISTIAN romances. Those are included here too though.

On this page I feature both the classic Jane Austen and more modern authors like Georgette Heyer and Candice Hern.

The quintessential regency romance novelist is Jane Austen, but since she wrote about the people of her time she is not what you’d call a ‘historical’ romance novelist. Still, I’ve listed her works here because they really are genius. It’s no wonder they’ve been turned into movies and reworked countless times. I think she’s funny as well as very observant of people.

Georgette Heyer is a recent discovery for me – she wrote regency novels from the comfort (and implicitly the perspective) of the 20th century. As a result we see a bit more of the perspective of servants and merchants than Austen would ever have given us. I really like her funny style as well as the mystery she works into her stories.

The Bronte Sisters created romances that today are considered ‘Gothic’. The mad woman hidden in the attic (Jane Eyre), the ghosts – real or imagined – in Wuthering Heights…

Personally I like my romances neither steamy nor with a detective / adventure theme. Still, many of the authors mentioned here have written books that are either or both.

She wrote in the regency era herself, so it stands to reason she was a ‘regency’ romance novelist. In fact she was one of the inventors of the romance genre as a whole. Her most popular novel is Pride and Prejudice, probably because it isn’t merely romantic. It also has a villain and a lot of suspense. I have not merely reread all Jane Austen’s novels several times, but I have also read a LOT of Pride and Prejudice Fan Fiction. I don’t know what it is about that story – but like so many others, I like to keep coming back to it.

This 20th century US author invented the ‘historical romance’ genre single handedly. In the way that Jane Austen and the Bronte Sisters aren’t rivaled since – Georgette Heyer is unequaled as well.

Historical romances published today are usually historical in the setting, in the customs, but not in the language. The characters are usually strikingly modern and all in all they’re sweet stories, romantic, sexy often, but not really that good. Don’t get me wrong: I enjoy reading them, but Georgette Hayer goes one step further.

She researched the regency era and made sure the language fit the times – this means some words will be unfamiliar to today’s reader, but never so that you don’t understand the story of course.

What I really love about her books is that they’re funny. The female lead is usually smart, has a bit too much pluck to be fashionable and Hayer excels in getting the characters into scrapes and out again.

Like many Georgette Heyer novels this one is set in the shade of a quarrelsome patriarch with way too much power. When his two sons have died, the 80-something year old Darracott finds that his sister’s son Hugo is his heir. Instead of telling the rest of the family, who doesn’t know of the man’s existence, he tries to find legal means to not have him inherit his title and estate.

The result is that when Hugo finally comes to take stock of the property, his family and the tenants, nobody knows what to do with him. Darracott wants him to marry his cousin Anthea, a smart and outspoken women in her twenties.

The way to love is marred with misunderstandings, adventures and fun. Hugh turns out to be very different from what everybody has expected him to be.

Sophy has grown up in the army as the daughter of a high end diplomat. Since he’s single, she has learned to manage him, his house and everybody around her. She’s a matchmaker of Emma (Jane Austen) proportions, but used to succeeding. Through all kinds of twists and turns, involving several matches, she meets her match.

Picture an heir (Alverstoke) who is so used to wealth and consequence that he’s never had to work a day in his life. To his ill luck he’s good looking as well as well spoken, so he’s a great hit with the ladies and hasn’t had to work on that score either. He’s positively bored.

Then a distant (very distant) relation (Frederica) calls upon him it’s because she literally has nowhere else to go and several younger siblings to take care of. She’s decided she’s too old to get married, but has a magnificently beautiful sister who, she thinks, deserves to marry well and is therefore in need of ‘a London Season’.

The Cotillion is a dance. In this novel we have an uncle with a ‘ward’ that’s ready for marriage. Mr. Penicuik is a rich tyrannical man who charges his ward ‘Kitty’ to marry one of his cousins so she can have all his inheritance. She’s infatuated with one of these cousins, but he doesn’t offer for her. Two others are totally repugnant so she asks the one who is at least reasonably sympathetic to pretend to be engaged to her.

They go to London for a month of coming out and Kitty makes a splash in all kinds of ways, making the wrong friends, enjoying the fashionable life and trying to solve everybody’s problems. In the end all is well – and she marries another cousin than she at first hoped, but very much in love, of course.

If you like your romance novels to be funny, full of humor, then Candice Hern is definitely an author to keep an eye on.

I think she can best be compared to Georgette Heyer: like her the stories play with social convention, expectations and feature very strong women.

In ‘The Best Intentions‘ for instance we meet Hannah – a girl too smart for her own good, or so everyone seems to think. She faces a dilemma smart girls still face today: do you dumb yourself down in order to find a mate? She refuses to do so, and throws herself into her study of ancient architecture with a vengeance, giving up on the idea of romance altogether. And all this at the tender age of 19. Luckily she meets a man who isn’t at all intimidated and falls in love with her.

Fun, exciting and surprising – best available on Kindle, otherwise out of print and available second hand

Barbara Metzger excels in stories in which the hero and heroine fall in love overcoming social obstacles that would have been insurmountable at the time. Throw in a bit of crime and detective mystery as well as humor and you have a funny, romantic novel that will keep you cozy on your coach for an afternoon or two.

A Loyal Companion for instance is told from the perspective of the dog!

Margot is Saved by Scandal: her husband chose her because his fiancee had already left him at the altar and he wants to up her in society’s eyes. Nothing worse than people pitying him! Marrying a famous songbird will have them talking in envy instead, however much of scandal it may be.

The Painted Lady – imagine you’re a painter so good that one of your paintings starts talking to you! What do you do? You think you’re going mad of course… When you’re a duke in the bargain, you can’t marry the one person who understands you, can you?

I really liked this book: it’s told, for once, from the perspective of the dog owned by the lady who is out to find herself a man on the London Marriage Mart.

What happens to a lady that gets to such hard times that she must help her aunt with her seances just to get food on the table? Well, marry one of the clients of course! However, before we get there, there’s mystery (of the detective kind), dogs, jewelry, water…

This is another story in which the heroine is very much on the borders of polite society – beyond them in fact – but marries the rich duke anyhow. As in all arranged marriage stories, they will have to find their way to love AFTER the marriage. In this case the lady turns out to be a suitable candidate after all. Despite having been an actress…

This is the fantastic, but still moving, story of a duke who paints (nudes) and the lady he marries: down on hard times supporting her uncle, a wayward psychiatrist. Is the duke mad? Is one of his paintings talking to him?

Where to Jane Austen social stratification is a thing to respect and those who cross the class divides never end up well, it’s different for modern authors in the regency genre.

Georgette Heyer (D 1974) treated those same class distinctions with humor. The differences in money, manners and expectations between various groups in society are never ignored, nor are they subject to debate. However, there IS a sense of humor and the servants get a voice.

Julie Klassen goes one step further: women overstep the social boundaries almost as a matter of course. They have to be strong, because those around them aren’t supportive. They’re not victims, they shape their life. Instead of being punished for these social transgressions (becoming an author, taking your father’s place as a tutor, becoming a maid) all’s well that ends well. These are romances after all…

She also ads an element of the Gothic. Creepy halls, hidden secrets – it’s another way to bring our modern perspective into historical stories: in The Tutor’s Daughter the mad aren’t (as in Jane Eyre) to be hidden away, they’re people with feelings and rights.

Don’t get me wrong: Julie Klassen writes well researched and believable stories that keep me interested till the end. The plot takes surprising turns even if it’s often not hard to figure out who will end up with whom halfway through the story. But that’s true for most romance novels.

Some of Julie Klassen‘s books have a distinct Christian voice and subtext. It doesn’t get to the point that it gets in the way of the story or becomes the main theme, so it doesn’t bother me, despite NOT being a Christian myself.