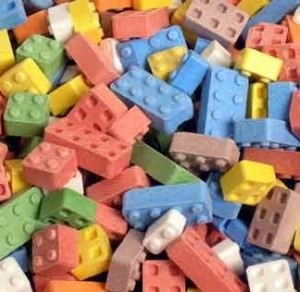 Are you planning a kids party with a Lego theme? If so, I have found some fun ideas as favors to give the guests of the party. Sometimes it is difficult to find the little party favors to go along with different themes but not so with Lego party favors for kids! Depending on how many kids are going to attend the party, the gift bags can really add up to the cost of the overall party. These party favors can be divided up so that each child gets one and at a low enough cost per item that it does not break your budget and wallet for the hosting of the party. Just about every age level of kids love Legos so a party with that theme works well. The fun building bricks also appeal to both boys and girls, too.

Let’s start with the bag to put the party favors in. The colorful plastic bag looks like it was built with Lego building bricks. Each bag measures measures 9 inches tall and about 6 inches wide so there is plenty of room to put some fun little favors for the guests at the party. The handle is a cut out which makes it easier for children to carry. Sold in a package of 12 bags in each package.

Does your child really want a Lego themed party this year? Have you been scratching your head wondering where you could find Lego party decorations and supplies? Your search is over! I can show you options for not just a Lego Party but you can even dial it down to specific styles of Legos. Some Lego themes offer more of a selection than others so let’s take a look at the Lego Party supplies, decorations and Lego party favors and decorations that are currently available.

Currently the theme that offers the most in party supplies for a Lego party is the extended theme of the Lego City. The nice thing about having a party with this theme is that it can incorporate other things that young boys typically like to play with. Some of the paper supplies have a fire truck while others may have airplanes or a police car. The theme can be enhanced by some of his Lego sets that have been built or cars, trucks and other city vehicle toys that he has around the house.

Whether you have a cake, cupcakes, cookies or other foods at the party; you will need plates to serve the food on. There are some really fun options for Lego party plates to choose from.

There are even Star Wars Lego Party Invitations available! 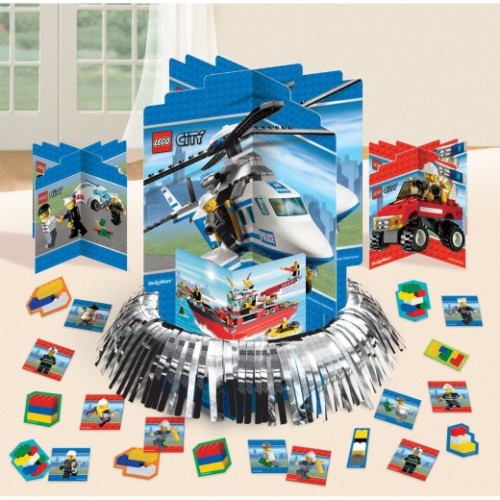 There are napkins, centerpieces, invitations and everything you might want or need to make your party a success for your child and his guests. Here is a short list to get you started.

Sadly, there are not a lot of supplies and decorations for the Lego Batman theme on the market currently. I did find this cake icing image that can be applied to the Birthday Cake. Add some Batman balloons, napkins and paper plates that have the original Batman logo on them and it will still be festive for your child. You could even place some of his mini-figures on the party table as decorations.

Apart from this backpack, I could not find any party supplies for Ninjago either. With the popularity of this Lego theme, I believe they will begin to be manufactured. When they are, I will list them here for you.

The Stuff You Will Need For A Lego Party

Do you have a child that has a birthday coming up and they want a Lego theme? Have you been searching for the perfect party supplies to have at the party?

There are some fun options to help you give your child a great party with just the right elements to make it a hit with the birthday child and his or her friends. You can even narrow it down to a specific line of the popular company who have been delighting us with their building bricks for several decades. Your child might prefer the Star Wars Legos and you can build an entire party around just that.

You can also incorporate several themes into one including more than one of the sets by using plates from one theme, general Lego items for favors and another theme for the centerpiece and other decorations. The choice is yours. About the only problem you might encounter is choosing which ones because there are some delightful options for you to consider.

It is pretty standard practice to give the children who attend the party a favor of some kind. There are “loot” bags that you can place items in for each child that look like they are made from the building bricks. You can decide what the little gifts will be. The fun part is, there are so many cute things to choose from!

Will you be serving cupcakes?

If cupcakes are on the party menu, these wrappers would work nicely for the party. You get 24 in a package so they are a nice economical choice for helping to decorate. These are not meant to be backed in! Prepare your cupcakes as you normally would and then wrapped each one with one of these cute little wrappers. What a fun idea!

You can get two uses out of the Lego candy party treats. Perhaps have an activity during the party where the guests build something with the candy. Oh yes, they can build with these pieces! That is one less game to try to come up with and each guest gets to keep the candy and eat it if they want to. The candy tastes similar to Sweet Tarts. Comes in two 1 pound bags.

What is a bag of goodies if there isn’t any little sweet treats inside? I just love these little pieces of candy that can be added to the favor bag that are shaped like little Lego bricks! They are called Candy Blox, isn’t that fun? They come in fruit flavors and are slightly tart.

Erasers look like Lego bricks and come in the primary colors of green, blue, red and yellow. This could be a gift for a guest who wins at one of the games or you could split the package up to give each child one eraser in their treat bag. A nice favor for girls and boys to receive. They would even be a nice stocking stuffer at the Christmas holidays.

An economical choice with a nice variety of small items that can be placed in the goody bag for children to take home with them. The pieces all have the Lego City theme to them. You won’t have to search around for lots of different items with this choice. You get six different items with enough to fill eight bags.

Little “loot” bags to load with candy and favors for each child to take home with them after the party is over. You get 24 bags in one package. They measure about 6 inches wide by 9 inches tall so they will hold quite a lot.

Apparel for the party: Lego-shirts!

It might be fun to have the Birthday child wear a Lego T-shirt to the party. There are several themes to choose from when it comes to kids shirts. Ninjago is a popular theme with young boys and although there does not seem to be much in the way of supplies to have a Ninjago party the child could wear a shirt with the theme. I have compiled a short list of themes that are available for you.

One thought on “Lego Party Favors For Kids”