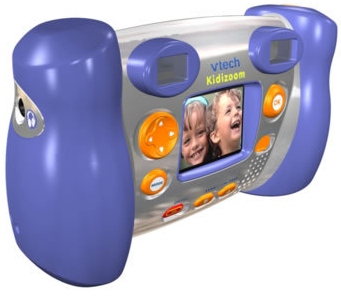 Kids see adults taking pictures all of the time and in most cases they are the subject of the photograph. This starts with toddlers and they will really enjoy having a toy camera that takes real pictures of their own. The toy cameras reviewed below are the top selling digital cameras for children sold on Amazon. Allowing a young child (starting age 3) to learn to take photos while they are young might encourage them to become a photographer when they are older or at least have a comfortable feel for taking pictures. The wonderful thing about most of these cameras is the ability for connecting to a computer so that the pictures can be printed out for your toddler to actually hold. All of the cameras offer editing features and each has some built in memory to store the images. 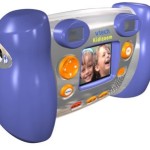 A camera sized for smaller hands to operate. Considered a toy but this camera actually takes pictures. The images are 1.3 megapixels and the child can zoom up to 4 times. The camera has 128 MB of internal memory that can hold up to 1000 pictures. Your child can learn to edit photos along with adding fun stamps, borders and silly effects to the photos that they have taken. They can also record a video with sound. A child also has the option of playing 3 different games from the camera. You can attach this digital camera to a computer to download the images onto a larger hard drive, if you like. The manufacturer recommends this for 3 to 8 year old children. The camera shown is in pink but it is also available in a orange or blue model.

Currently this toddler camera is the best selling and highly rated camera on Amazon both in the pink and the blue model. This camera for toddlers in mind takes real photos that are good quality. It is kid friendly and most kids can figure out the basic operation on their own. Built to take the rough handling that a kid will give it and has rubberized grips on the sides so that kids do not easily drop it. It requires 4 AA batteries that need to be purchased separately.

The name says a lot. It has been designed to hold up to the tough way that kids sometime play. The camera also has larger buttons for the smaller hands of a pre-school child to be able to operate. It does take real pictures, too. The viewing area when taking a shot is kid friendly as it is for both eyes to view. The screen is a 1.4 inch color screen for a child to view an image he or she has taken with the camera. A 4X digital zoom feature is also a part of this camera by Fisher-Price. There is 256 MB of memory that can hold up to 2000 pictures. Kids can create some fun effects with their photos and the camera can be attached to a regular computer. It requires 4 AA batteries that will need to be purchased separately. Recommended for ages 3 years and older. The camera is available in both blue and pink.

On the most wished for list is the Fisher-Price Kid Tough camera for toddlers. One of the reasons for it being wanted by kids and the adults who make the wishlists for toddlers is the name recognition of Fisher Price. It is a sturdy camera for kids to handle and pretty easy for them to use. It is has an average rating of 4 out of 5 stars so it looks like most buyers are happy with it.

This camera takes pictures but they not of the quality as with the VTech models. However, it IS a toy camera. It is compatible with Windows operating systems, but will not work with Apple or MAC systems.

Also by V-Tech this camera offers 2.0 megapixel image photos along with a 4X zoom option. There is a 5 minute timer feature along with video recording capabilities. A rotating lens allows for self-portraits. There is 256 MB of built in memory along with an SD card slot for expansion of memory. There are 5 games available for play straight from the camera and children can also edit their photos with some effects. It can be connected to a computer for downloading and uploading pictures and software. Recommended for ages 3 years to 15 years and comes in both pink and blue. Requires 4 AA batteries sold separately.

Another option from VTech. The Kidizoom plus has the option of using the two eye viewer or the screen for taking pictures. The images will be 2.0 megapixels with a 256 MB built in memory to store images. There is also a slot of an SD card but you have to purchase the card separately. The camera can be connected to a TV so that kids can see their images on a larger screen and they can also play the built in games while viewing from the television. They can edit and create special effects on this durable camera built with kids in mind. Recommended for 3 years to 7 years and comes in pink or blue. It does come with 4 AA batteries to get you child started in taking pictures. 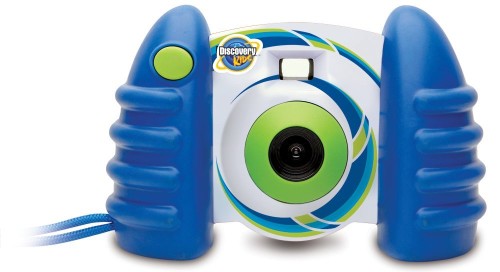 A color 1.5 inch display on this kid friendly camera. Offers 16 MB of built in memory and provides a USB cable to connect to a PC so that the images can be stored or viewed on a larger screen. An installation CD is included. With the smaller size memory capacity it will only hold about 120 images at a time but you can save them to a computer. It is capable of taking videos, also. Requires 4 AA batteries that are not included in your purchase.

Relatively new to the toddler camera market is the Discovery Kids camera. It is built to take the roughness in handling that a child will give it. It is a very basic little camera without a lot of storage capacity but then how many of the images will be kept by the child, anyway? Most photos will be blurry. This is a toy and should not be expected to take high quality photos. It does have the ability to upload photos to a PC with a USB cable that is provided with the camera. Falls within the pricing range of most kid cameras. 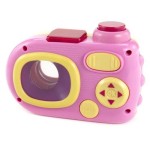 A camera for toddlers to just pretend to take pictures with. It will not take photos at all but allows the younger children to get used to holding a camera and use their imaginations. It helps to develop their motor skills and allows them to explore the cause and effect of the activities they can perform. It takes 2 AAA batteries to operate which are included with the purchase of this pretend camera for kids.

Because this is not an actual camera, it is way cheaper than the other toy camera’s on this page.

If you are thinking of giving a camera to a child this year, it might be helpful to read a short list of toddler camera reviews. It might help you to decide which kids camera will work the best for your situation.

You may want a camera that will actually take good quality photos for the best price. It may not matter about the images that are produced but the sturdiness of the camera while being used by a toddler. You may not want a camera that takes pictures at all but just the ability for a young child to pretend to take pictures.

At the end of the reviews I did pick a camera that is OK for what it is but might be one that you should opt to not purchase. After all, isn’t that what reviews are about? Helping you to avoid something that you might be disappointed in.