I’ve found the ideal fake phone to make sure your baby or toddler leaves the ‘parent’s phone’ alone. Seriously. It makes music. Your child can have fake conversations with it. This is a real life saver that will help you make sure 911 gets called ONLY when you really need it to.

This toy mobile phone also helps your toddler learn numbers, is totally safe, and won’t run up your phone bills. Of course it doesn’t look like a smart phone, but then again, perhaps your toddler is not that smart just yet? Pun intended – I’m sure your kid is the next Steve Jobs. However, do they really need a fake iPhone? I think they’re better off with something that will teach them numbers and lets them play around. I think one of these makes a great toddler gift.

Toddlers watch us adults using our real phones all of the time and usually want to play with them, too. Providing a toddler toy phone for them to play with is much wiser than allowing them the use of our expensive phones. Some of the fake phones for kids look almost real while others have the look and feel of a toy. The toy phones provide entertainment and encourage pretend play while also working on learning about numbers, counting and other various activities that a child can never practice too often.

Then again: a niece of mine is already playing with her parent’s iPhone at 1 years old… If you like that, I think I’d personally get them an Apple iPad. An iPad can hold all kinds of educational apps – well, let’s face it: at this age any app is likely to be educational… Get a refurbished iPad in a fun sleeve and you’re set.

Below are several simple phones that allows for pretend play – with a device that does have a screen that responds to what your toddler does as well as helping them learn to count, learn their letters etc.

An affordable alternative is to get a dummy phone model

Our kids have a bunch of fake phones that used to be the display models in mobile phone shops. They like that the phone looks real, but I’m sure they’d appreciate the sounds of the toy one. 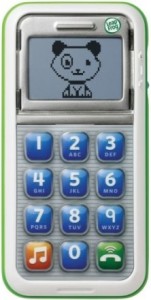 This fun little toddler phone almost looks real. Children can push the call button and enjoy pretend calls from either Violet or Scout depending on which model you purchase. Pushing the music button will play a song that the child can sing along to. The songs are about phone routines and counting so that a toddler can begin to understand how to use a real phone and practice their counting skills. When any of the numbers are pushed from the keypad the screen shows an animated Violet or Scout count the number out in an entertaining manner. The toy phone includes 15 different phone activities for a child from 18 months and older. This little fake phone for a toddler requires 3 AAA batteries to operate. The batteries are included in your purchase.

Well it finally happened. This toy phone has replaced the Parents Phone in our house. For years the Parents Phone was a favorite with our first born, now 3 1/2. My one year old was given the “Leapfrog Chat and Count Phone” for his birthday and now it is his go to toy. He throws the Parents Phone across the room and shrieks in frustration. He loves the music button on the Leapfrog phone, pushes it and does a little dance. He also puts it to his ear and pretends to have a conversation. Since he has never seen a flip phone, I am not sure he knows that the Parents Phone is a phone. The Chat & Count Phone goes everywhere with us. It is perfect for the car, grocery store and doctor’s office.

I purchased this fake phone because my baby wouldnt leave my blackberry and cordless phone alone. worried she would one day accidentally dial 911 i looked up a phone to purchase for her that would be somewhat educational and found this one, I have to say it is soo cool, so now she will leave my berry alone, this is going to be great for car trips and alot of other things it it entertaining and enough buttons and noisy things to push around that is plenty of amusement the little animated pictures are fun for counting and development towards number recognition, even though my baby is close to 12 months it is still worth the purchase as she is engaged with it for a little while i see her carrying it around when she starts to walk and will be growing into it more and more.

My daughter got the Scout Plush a while back so we picked up the toy phone now that she is older (she still falls asleep with the plush every night). This is one little tough fake phone with a lot of fun learning animations for each number and other fun functions. My daughter like most kids love have whatever mommy has. It was great to pick up a toy phone that somewhat realistic looking and also has the learning done right for my little one. Ruff ruff!!!

Parents rave about this toy phone. Apparently real phones are the favorite toys of many infants and toddlers, and this fake one is the ideal solution. They’ll learn something, and yet they’ll stay clear of your real life mobile.

The main feature of this toy phone? It doesn’t really make calls! But it’s fun enough to keep your child interested. It has music, voice mail and a ‘pall scout’ that talks to your baby.

Just one reason to love this toy…This phone does NOT work! Seriously, isn’t that great? A toy phone to play with that won’t get you into trouble, nor build up your phone bills.

From the reviews I would say that this phone is slightly more durable than the next one on this list: the VTech touch and swipe:

This toy phone looks more like a modern smartphone. Otherwise it’s much the same: in built ‘apps’ for learning letters and numbers and enough noises to keep baby busy.

A cute little fake smart phone for toddlers to play with, it even has a slide down keyboard like many real grown-up phones offer. Toddlers can pretend to send text messages or make calls with this toy phone. Children can have up to four friends that they call or message and sometimes there is a surprise with a wrong number message. The LCD screen can be viewed in portrait or landscape modes. Playing with this fake phone will teach a child about numbers, letters, counting and even alphabetical order. Recommended for ages 2 to 4.

A toy phone for toddlers that are at the younger end of the age scale. It does not have that “looks real” appeal but is good for the little ones to begin to play with and be entertained by. The price is reasonable, also. The function buttons look very realistic for a child. Your young toddler will enjoy hearing sounds that mimic the sound of dialing, a busy signal, pretend voice messages and beeping sounds with a light effect. A fun phone for the 2 year old. Your purchase will include 2 AAA batteries to operate the toy phone.

The pretend phone slides up to use like many phones that children see adults using. This toy reinforces learning numbers and shapes. The mirror screen has four different characters that the toddler can pretend to call. Requires 3 AAA batteries that are included with the purchase of this toy phone for baby and toddlers.

A toy for toddlers that almost looks like a fake iPhone which might make it more appealing for children to play with. Often times young children spot the difference in the look of the toy and the real phone and want the real deal. Helps with hand to eye coordination while teaching about numbers, colors and animal facts. Features 16 touch sensitive icons and 4 fun games for toddlers to pretend with. Your purchase will include the 2 AAA batteries necessary to operate this fake little phone.