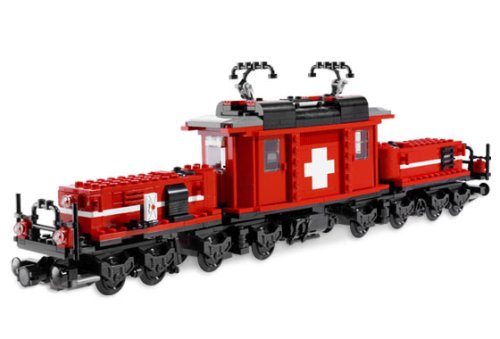 AFOL And Proud I Am An Adult Fan Of Lego TOYS

The term AFOL in case you are unsure, means Adult Fan Of Lego I am a 30 year old Adult Who Loves Lego, i love collecting it and love Blogging about LEGO Too. Being and Adult Fan Of Lego is not as rare anymore and the term AFOL has really caught on in recent years due to its increasing popularity among people of all ages and backgrounds, including the rising number of Celebs whom claim to be AFOL.

The Hobby Train by LEGO is show above.

There are many many people out there whom cringe on the idea of Adults Collecting Lego Toys. I myself have often been laughed at and jeered when admitting my fondness of Lego Toys but why is it such a funny thing? Why shouldn`t adults collect LEGO? Lego Is Not Just For kids anymore.

Are you looking for Lego Sets that are designed for people who are 16+ years old? I think you will be pleased to know that not all Lego sets are designed with little kids in mind. For the fans of these wonderful plastic building blocks who have now reached the age that still wants to build awesome things with Legos but also want the challenge of a set that requires some real skill, there are some sets you might enjoy.

You are looking for a Lego Set that will not look like it was meant for a child to play with once it is built, am I right? I have found some really cool Lego sets for the 16+ crowd.

Lego Minecraft is a virtual lego game. Take lego on the road!

This year the big thing is Lego Ninjago – it comes with videos and online games as well, younger boys love this one. Scifi Lego Star Wars on the other hand is already a classic, just like Star Wars itself. Lego Mindstorms is about building your own lego robot, that works!

Lego Is Not Just For Kids

there are tons of Adult Fans Of Lego World WideHave you seen the massive massive collection Of Lego Sets out there?
Are they all just for kids?

This page will show all the skeptics…. That LEGO is suitable for kids and adults over 16 as well.

I remember the fun I had back in the 80`s when I first started collecting Lego, I even remember the first set I  got when I was 6, it was the Lego Town Ship Yard and boy was I impressed with the whole new concept of building a toy you play with.

You see as we are all aware Lego is not just a toy that you take out of a box and play with straight away, you have to follow instructions and build it step by step in order to enjoy it to it’s maximum potential whilst gaining respect for a toy at the same time.

In my opinion Lego is a toy you grow with and end up respecting more and more as you mature, it`s a toy that is beneficial to any youngster as it teaches them great skills such as coordination and building skills that they will thrive on later in life. Over the years I have seen the Lego Group release more and more intricate Lego Sets for the Older Fans Of Lego, a lot of these sets have 16+ on the box and in some countries that age is known as “a young adult” so that is why sets such as these are more attractive to the more mature adult Lego Fans.

These lego sets are very very detailed in appearance

Not only are they detailed to look at but are advanced in the creation of the finished product. There is enough difficulty to them to make them fun for the adult to build. Many people like to have more than one set up to create a village of buildings that they built using the popular plastic bricks and pieces. 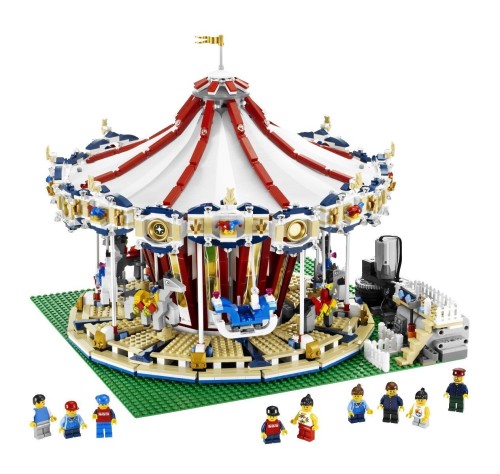 Lego Creator Carousel For AFOL’s 16+ – if you have a lego display this will make a great addition.

This is as real a Merry Go-round as you can make with Lego. It twists and plays music while the steeds and swing watercrafts climb up and down! It is a perfect set for the advanced Lego builder, aged 16 years old or older. It has working parts just like a real carousel with music and spinning. A carousel collector would love this intricately detailed set! There are 3263 pieces to put this set together and it includes mini-figures along with a sound brick and a motor to make it move. Just like a real carousel the horses move up and down, too. When completed the build will measure about 15.1 inches by 15.1 inches by 13.8 inches.

Including complicated and unique decorations that to make it look realistic, the Grand Carousel is a dynamite augmentation to any LEGO presentation or Fun Fair recreation.

An absolute perfect Lego set for the Adult Fan Of Lego, not suited for children due to it`s complex building requirement.

Most adults whom are fans of Lego such as myself have some sort of Lego collection out on display so if a Lego city is a display that you own then this will make the perfect feature. You must admit, “This Looks Cool” and would most definitely generate attention by just sitting on a self in your living room. 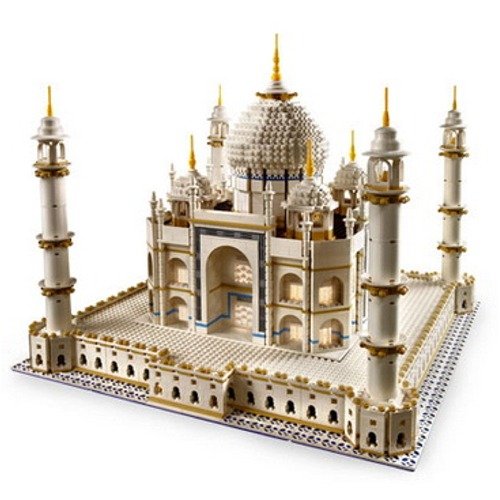 Cities around the world are often recognized by a land mark building or structure. Now adults can replicate those famous buildings, bridges and tourist attractions using the little bricks and pieces that make for a unique display in their home or office.

This Lego set is most definitely for the 16+ crowd of builders even though the box says 14 years and older. The set has advanced building skills that are required to place the 5922 pieces together to look like one of the most remarkable architectural buildings of the world, the Taj Mahal. When finished building this set the building will be over 20 inches wide and 16 inches tall. It will include the base of the building along with minarets, domes, finials, arches and front stairs. A most incredibly detailed set for the serious Lego builder. 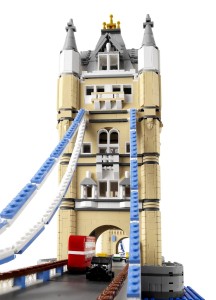 Challenge your Lego enthusiast to build the famous Tower bridge of London. They will use a little over 1200 pieces to construct this most recognizable bridge that was originally constructed in 1894. The drawbridge will open and close just as the real one does. The set includes some vehicles to put on the bridge, also. Once completely built the bridge will measure 40 inches long by 17 inches high by 10 inches wide. 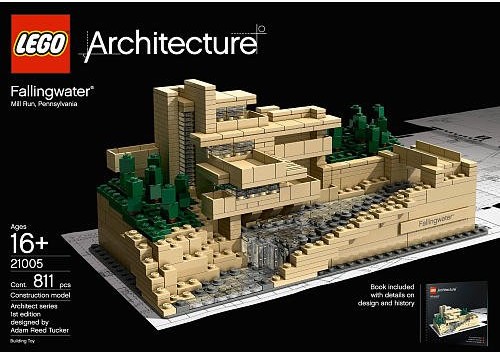 Impressive architecture fills the cities, towns and countrysides across the globe. Famous architects like Frank Lloyd Wright or famous buildings like the Empire State Building in New York City can be built in a smaller scale with sets of the plastic bricks that are not just for kids anymore.

With 811 pieces the 16+ Lego fan can build a replica of Frank Lloyd Wright’s Fallingwater architectural wonder. An instruction booklet walks them through the build process and also gives some history on the building that Wright designed in 1934. The building that was once a home, has been open to the public to tour since 1963. A great set for the future student of architecture or someone who is already in the profession. 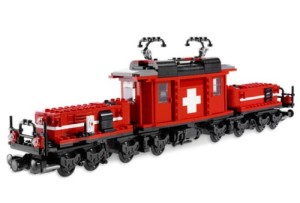 Build a train engine or car that is fully compatible with the Lego 9V train system with this set. Includes 1080+ pieces to build the railroad car. You will find 12 bearing elements, 6 clutches, 42 windows and other elements for your build. Printed instructions for you to build by. Recommended for ages 16 years old and older. The Lego 9V train system was designed by both Lego and model train enthusiasts. 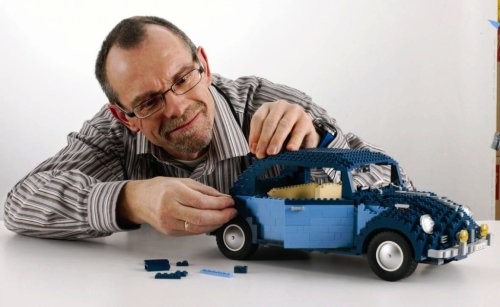 Perfect for the lego fans that love nostalgic stuff

The Volkswagen Beetle is one of the most popular cars around, so it’s no wonder that the retro Lego version is popular with adult LEGO fans. It’s the famous 1960 Charlotte model and measures 40.7 cm (16 in) long by 17.5 cm (6.9 in) wide.

The puzzle of it is how to combine the 1,626 pieces to form the entryways, hood and trunk, as well as the presentation plate with first VW model info. The challenge isn’t hard, but it does require patience.

In addition it offers a spare tire in the front and motor in the back, an exact inner part, and that’s only the tip of the iceberg.

The only thing better than having a vehicle made from bricks is that it also moves! That is right with these sets you can motorize the vehicle to move around. Now, that is just too much fun! 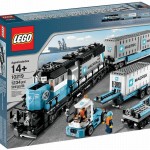 The quite-practical Maersk diesel-electric cargo train has reached it’s destination! An imitation of the veritable motor that managed on the railroads of America, this Maersk teach has all kinds of cool details. For example the driver’s taxicab can be opened, the side board is removable, there is a 16-chamber motor, and credible Maersk marking.

The model in addition combines 2 wagons and 3 compartments with opening entryways (1 with refrigerator). The set additionally combines a shunter truck and distinct trailer for stacking and offloading the compartments.

There are 3 workman mini-figures; The set contains 1,237 pieces overall. The train measures 36″” (92cm) lengthwise when complete.

An ideal set for the AFOL teen whom loves trains planes and auto mobiles.

Designing a Mindstorms robot is testing–but not too troublesome–with an outlined logically ordered booklet and product indicating the method. The booklet gives you guidelines for constructing a fundamental “Quick Start” robot, which is a straightforward beginning to the mindstorms encounter. This robot took our grown-up testers about 30 moments to build. After that, they spent a ton of time playing with their creation and testing its capacities.

Once you understand the rudiments of mindstorms, you should use programming to really make it interesting. You are able to in addition utilize the mindstorms net to spot directions for a large number of different robots, or you could make robots on your own specifications.

I imagine that the LEGO MINDSTORMS robots are interesting for the smart teen (and for the imaginative grown-up!) This robotics assortment can give hours and hours of enjoyment. While playing with it, you’ll have the ability to collaborate with folks onto every part of the planet, and you’ll have a start in designing your own.

Tell us what you think of Lego, are you a mature person who still has a fondness for this great building toy LEGO? Be sure to check back for updates we will be adding more Lego stuff that`s suitable for the Older Lego Fans. Thanks for visiting, if you liked this lens please consider rating us or recommending us to your friends.

[BTW – although I enjoyed Lego as a kid, this article was made for me by a real AFOL, while I’m merely a nostalgic lego fan. – Katinka]