If you’re over 60 you might want to get a touch tablet, but are wondering if it’s hard to use and which one will have the features you need without distracting issues and quirks.

Although I’ll go into detail later, the main point of this page is that if you want a tablet only for ereading, browsing the web and listening to music, you don’t need a top of the line tablet. You will do well to simply get a Kindle Fire. The Kindle fire HD has a good user experience, is integrated with the Amazon store for easy MP3 buying and is of course designed with ereading in mind. Any PDF you want to read on your kindle can be sent to your own kindle email address.

One reason I recommend the Kindle Fire is that it’s one of the most affordable tablets on the market. Another is that it has built in accessibility options like font-size. Other tablets have these options too, but they’re harder to use. You’ll need someone to set them up for you.

Remember that whatever tablet pc you get, they can ALL function as an eReader, play music and go online. They all have a touch screen as well. The difference are in how easy it is to these things and get access to extra functionality.

One way to choose the best tablet for you is to ask yourself: for which device do I have help available if I get stuck?

Worried about your eyes? Get the LARGE Kindle HD – Great tablet pc for your grandmother or grandfather

This kindle is 9 (8.9) inches diagonally across. That’s smaller than an iPad, but larger than any other Kindle.

You’ll love the quality of sound on this tablet – it is Dolby audio and has dual stereo speakers.

The Kindle Fire has access to the full library of amazon movies, music and books – if you live in the USA that is. If you don’t, do check to see what you get access to.

Great tablet for grandma or grandpa

It’s well known in the tech industry that Amazon looses money on every Kindle they sell: they give them higher specs than you’d expect for the money. They can do that, because you’ll be spending money on content sold through the amazon store. I think it’s a good deal: you get a tablet that has almost full tablet features (not quite, more on that below), is fast because the hardware is so good and is designed to work seamlessly to help you get access to the content you want.

No full access to Android market, so fewer games and apps. Still, we can be sure that the most popular games and apps are generally available for Kindle as well as for Android.

Skype – from the Skype forums it appears the Kindle Fire HD version of the app is not as intuitive to use as you’d want. Many people report trouble with turning on video. While solutions are also reported, most grandparents probably would not be very good at implementing them.

Skype is a great way for grandparents to stay in touch with their children and grandchildren. The Skype app can be installed on all the tablets shown on this page. It’s installed by default on the Kindle Fire HD, though there are some usability issues with getting the video option to work.

A wonderful gift idea for a senior citizen on your list is a tablet for them to use to stay connected with their children and grandchildren. Tablets are much more lightweight for an elderly person to use instead of a laptop computer which makes them easier to use in most cases. Not only will they be able to send and receive emails but they can also enjoy being on Facebook to keep connected with family and friends. There is also the advantage that they can read a book or even watch a movie from the tablet. Let me recommend some really good options for a tablet for seniors to use. In my opinion there are three on the market that are best used by an older person.

The iPad is the original tablet – that is, the tablet that made tablets go mainstream. It was designed with usability in mind, but in my opinion it does fall short in some ways.

For one thing: usability controls are only IN the apps – so if your eyes aren’t good enough to FIND the apps, you’re in trouble.

Still, like other tablets it’s very useful for eReading, taking notes, listening to music (you can buy music through itunes) and go online.

If you already have an iPod or an iPhone, it makes sense to get an iPad as well: connect to iTunes and your music and apps will be migrated to your iPad without a glitch.

In some ways this is about choosing your platform. When it comes to music, games and apps – iTunes has more available than Amazon. However, Amazon has apps for iPad so you don’t have to worry. You can get all the Amazon books through the Kindle app and amazon movies through the Amazon Instant Video app (only in the US).

Personally I use my old iPad (3 years old) playing music through a free music radio app. Since this is possible on other platforms as well, it’s not a deciding factor.

If the original iPad is too large for you, consider the Apple iPad Mini

When you’re older you don’t want to learn everything afresh, I don’t think. I’ve helped loads of older people find their way on their iPad or PC and I think I have a good idea on what you need.

While I personally love my Android tablet, the Galaxy Note 10.1, I would not recommend it to people not used to a touchscreen or unable to find their way in a new gadget easily.

It’s not that it’s hard, it’s that it’s a less streamlined experience than on either the iPad or the Kindle Fire. The other side of that is that there are more options on and Android device.

For instance, you can use Micro SD on Android, not on Kindle or iPad. This means it’s easier to transfer pictures and other files onto your android device. Whether you’ll be able to actually SEE and USE them is another question.

When it comes to media Android is just like the iPad or the Kindle Fire: you can get a Kindle App, Amazon Instant movies and music apps as well. The radio app I’m listening to on my old iPad is available on Android too.

The main plus for Android, for people over 65 or so, is that it’s the affordable option. While I have a top of the line Android tablet, the cheapest start under $100. That’s not bad. And you WILL be able to use them for eReading, going online and music playing as well as video.

In terms of functionality Android Tablets do have one advantage: they all come with Google Maps pre-installed. Everybody needs maps, right? 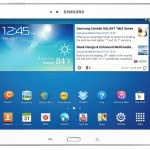 Another option for a senior to own a tablet computer is the Samsung Galaxy Tab 3. I am showing the white model but it also comes in black if you prefer a different color. This tablet is also a 10.1 inch screen for seniors to have a nice large screen to work with. It runs on the Android operating system like the Asus that I mentioned above. Samsung has their own apps store that have more productivity type apps and then there is also the Google apps store that offers a whole bunch of apps from games, books, and all sorts of things an elderly person might enjoy. They touch screen keyboard is really easy to use but they also have an option to use voice to give commands for many things. It takes a little set-up but is not difficult to get going. There is a front and rear camera on this tablet also which allows for video chats and taking images. One thing that I think is pretty awesome with this tablet is the ability to use it with a Smart TV (if they have one) that will allow the tablet to be used as a remote control.

This is the new kid on the tablet block. Microsoft finally came out with a tablet.

Do get the touchcover if you’re going to go for this tablet, because you’ll be wanting to edit MS Office documents on here and you’ll need the keyboard for that.
That’s the main selling point of the Surface tablet: the ability to edit MS Office documents on the go. NO OTHER TABLET can do this. You can edit files that are a lot like MS Office, and you can import them INTO MS Office, but that’s it, on most tablets.

As for music, eReading and movies – the usual rules apply: you can get all the apps you need installed and get going.

No Google Maps app for now, but there are private initiatives who created a free app (G Maps) that gives all the Google Apps functionality.
The thing with the Surface is that it runs full Windows software – and that means it starts up slower than comparable tablets running android or iOS. I can’t really recommend it, but it is definitely a contender.

When you do a cost-benefit analysis, the Kindle Fire is the best buy tablet, even if that charger isn’t included.

However, the iPad is a good contender if you have a bit more of a budget. It’s the classic tablet and still has the largest amount of apps in the market. That doesn’t have to determine your choice, as the most used apps are available for Android, Kindle (also a form of Android) and iPad alike. You can mail, go online and listen to music on any of these platforms.

The difference is perhaps one of habit: do you have an amazon account, including amazon movies? Do you want to watch those on your tablet? That’s a reason to get a Kindle.

Do you have an iTunes account and loads of music already bought there? Do you want to use your iPad for listening to that music? That’s a reason to go with the iPad.

Do you have a Google Books account and want to listen to music through Google Play? That’s an argument for an Android tablet, like the Asus or Samsung tablets shown above.

However, Amazon Kindle books can be read on all the tablets in the market. It doesn’t take a Kindle.