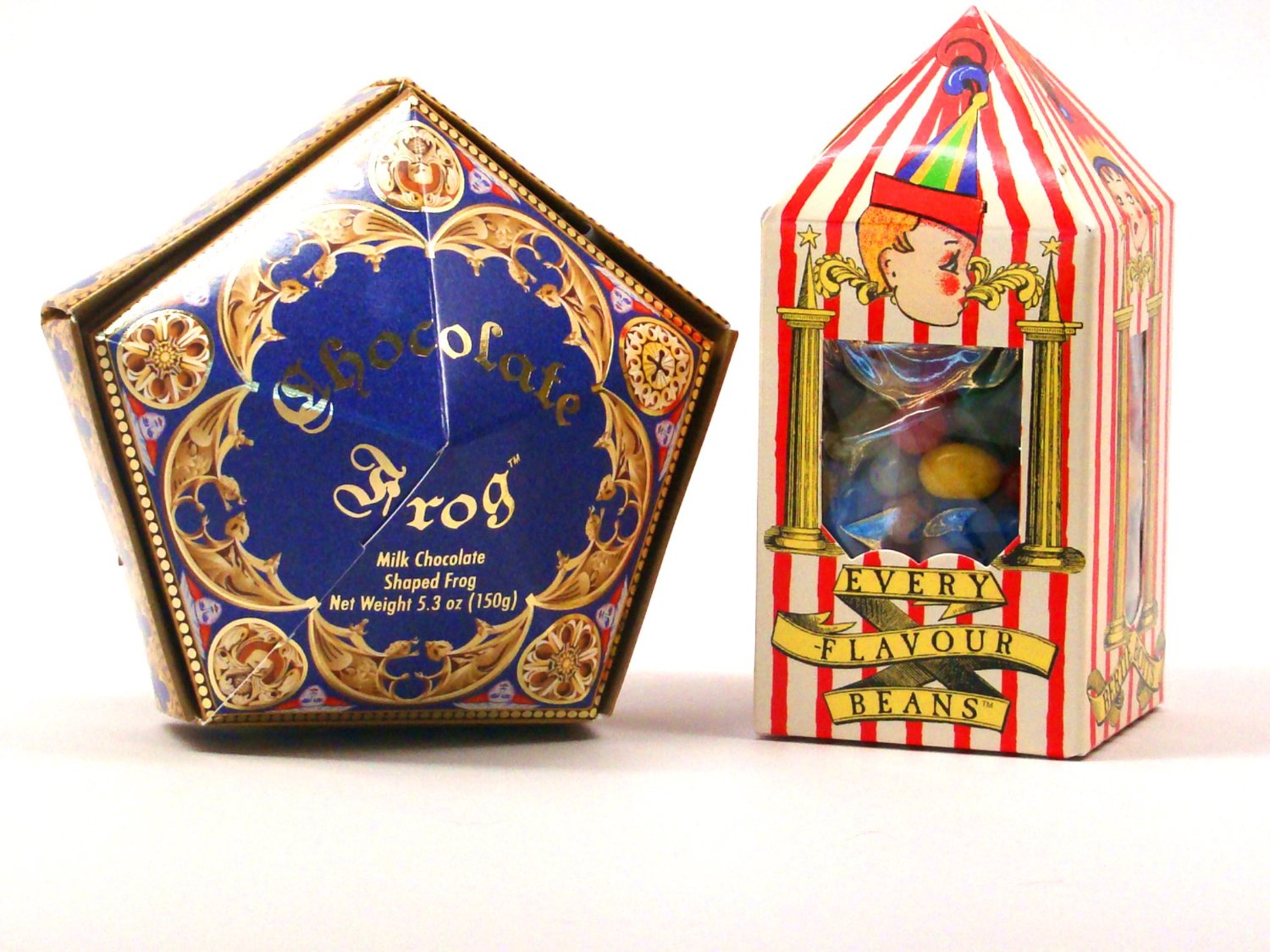 The genius of J.K. Rowling hasn’t just created a great fantasy series, or a spin off movie set, but also… an intriguing new collection of sweets. Some she invented, some she gave a new (magical) spin on, others are simply for ever after associated with Harry Potter, Dumbledore and the other characters of the Harry Potter series.

Following the success of the book, some of these assorted candy has found its way to the muggle public – though usually in a slightly less magical variety.
In the books these are sold in four places: Honeydukes, the Hogwarts Express tea trolley, by the Weasly twins at Hogwarts and by them in Diagon Alley their new store called Weasleys’ Wizard Wheezes.

This candy is great for Halloween, but also serves as a wonderful idea for Harry Potter stocking stuffers.

Kids and adults alike love candy and Harry Potter fans love to have some of the candy from the famous candy shop Honeydukes. The candy store made it’s first appearance in the third book: The Prizoner of Azkaban. It is even more enticing because Harry is not allowed into the village of Hogsmead where Honeydukes is located, because he has alienated his aunt and uncle (having blown up another aunt).

There are the jellybeans that are not your normal named flavors which are called Bertie Botts Beans. Actually there are two versions of Bertie Botts Beans with different flavors in each version. Then there is a chocolate frog that comes in solid milk chocolate or a crispy version. Fans of Harry Potter can also have a set of both the frog and beans as a truly great gift.  You can order these fun candy concoctions and have them delivered to your door. I know, your Harry Potter fan would probably rather visit the shop in Hogsmeade and maybe look for the secret passage to Hogwarts but unless they go to theme park that won’t be possible. They can still enjoy the candy when you give them a gift of Harry Potter candy. 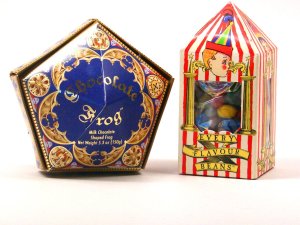 Cute and adorable – a great gift for any Harry Potter fan with a sweet tooth: young or old… Contains tins labelled Fizzing Whizzbees, Pumpkin Juice, Fresh Pumpkin Tasties, Acid Pops, and Cauldron Cakes. A combination package for the Harry Potter fan’s sweet tooth. Honeyduke’s Chocolate frog comes in a pentagon shaped fancy box and then there is a box of Bertie Botts Beans, too. The frog is solid chocolate and is not the crispy version.

A lot of vendors have hopped on this train, after all it takes no magic to create a set of jelly beans that have a lot of different flavors. I’ve listed the ones that were either the most affordable, or the best reviewed (or both).

Has VERY good customer reviews. The variety of tastes in this collection is good, while the taste is excellent.

Specific on their ingredients. No gelatin, lots of sugar or course, and no fat. Candy is never very healthy, but this set is perhaps less unhealthy and certainly more vegetarian than the usual. It has good customer reviews. 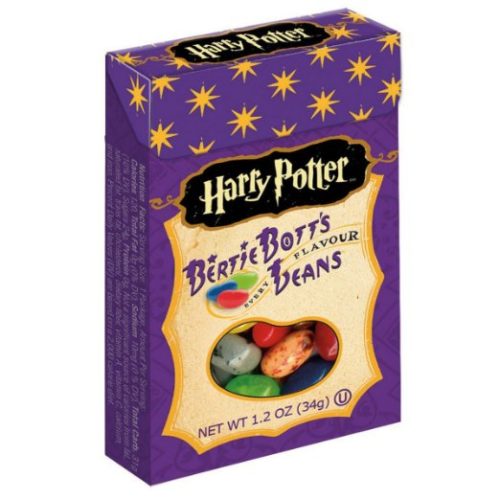 These are the real thing. Yes, they really do have every flavor. Rotten egg, grass and more. Yes, there are old fashioned sweets in there as well. Really just like the books and movies.

The only downside is that they’re rather expensive. One reviewer suggests mixing them up with normal jelly beans.

If you read the books or watched the Harry Potter movies, you know that Harry’s favorite candy is the Bertie Botts Beans, jellybeans that is. Your purchase will give you two boxes of candy with all of the flavors in them. You will have normal flavored jellybeans and then some weird and gross ones. Flavors include Skunk Spray Licorice, Pencil Shavings Top Banana, Rotten Egg Buttered Popcorn, Toothpaste Berry Blue, Canned Dog Food Chocolate Pudding, Barf Peach, Booger Juicy Pear, Moldy Cheese Caramel Corn, Baby Wipes Coconut and Centipede Strawberry Jam. 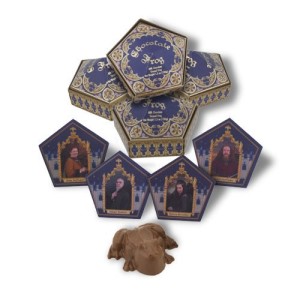 Chocolate frogs
These obviously don’t jump on your window as the chocolate frogs do in the Harry Potter movie, but as one of the favorite sweets Ron and Harry like, why not try the muggle version? You’ll have to make your own though as apparently chocolate frogs are not something sold in the US or Canada. Which is weird, we have had chocolate frogs in our Dutch candy stores for as long as I can remember.
I’ve picked the most practical mold I could find.

Well… no licorice wands for sale at Amazon, but licorice sticks are just like a wand anyhow. Yes, these can be eaten. A very old fashioned candy indeed. But who said candy stuffers have to be new? So here’s some real licorice without artificial flavorings.

As a Dutch person I insist. Licorice is one of our national foods you know, unofficially of course…

I asked readers on a previous version of this page which magical Honeydukes candy they would most like to taste.

Here is what they said.

List of Non magical candy in the Harry Potter books 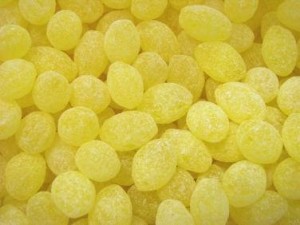 Sherbet Lemons are NOT the same thing as Lemon Drops, but Sherbet Lemons were replaced by Lemon Drops in the US version of the Harry Potter series. Confused? Let’s say that both are lemon like sweets and since I have only been able to find you Lemon drops, I guess you’ll have to be content with that.

Chocolate Gateau – That is: chocolate cake

This is hardly magical in the ordinary sense of the word, but these do look delicious. The price point is a bit above what you’d spend on a children’s party, but perhaps this can be saved for the adults after?

Which do you think is the most awful of the disgusting Honey Dukes candy?

900 people voted in this poll.